I love having dinner with my in-laws because they are always smiley, nice and happy and well to be honest, they always love whatever I cook or bake!

So we went grocery shopping in the morning and we got this big pack of blueberries! So sweet and juicy, calling me to bake them into a blueberry galette! And that’s what I did, a tasty blueberry galette, not so sweet, with a buttery crispy crust, OH-SO-GOOD.

What I like about galettes is that they are so easy to make, they have a rustic shape and a fast way to make a pie if you just don’t want to go through all the hassle of putting the dough in the pie pan and making it pretty and make a lace topping. You don’t have to make a perfect circle, it’s very easy to make it as a whole galette or individual ones, which are so cute, and I’m going to make individual galettes pretty soon.

I normally try to use any type of unsalted butter that has less fat than others because that’s how we like it. It’s just so difficult when you want to eat healthily but at the same time you can’t say no to pies, tarts, galettes, or any other delicious food! So because we can’t say no, we try to make it as healthy as possible, and if we fail to health-alize (if that’s a word!) it, we try to eat as less as possible.

I started making the crust by mixing flour, sugar and salt. Then I added butter, which I had already cut into pieces and refrigerated again, and I started to mix everything until it forms into small pieces like bread crumbs. It’s ok to have chunks of butter but not too much. I did this with my fingertips but you can either use a food processor for the whole process or a pastry cutter. Then I added ice water and just mixed it until it formed a ball. We don’t want a wet or very dry dough. We just need enough water to have the dough as a ball. Resist the temptation of kneading the dough, no kneading! And why? Because if you knead the dough, the butter will soften and then your dough will never come together and won’t make a good crust. So resist that temptation, that voice in your head saying “we should knead, let’s knead!”

So usually this is the step we wrap the dough in a plastic wrap and have it in the fridge for an hour. BUT this time I decided to roll it out and then put it in the fridge. I know it may take more space but trust me it will give you a much better crust and it’s just much easier to make the galette when the dough is already rolled out.

I laid a layer of plastic wrap on the counter (make sure it’s big enough to roll out the dough) put the dough on it, and laid another layer of plastic wrap on top of it. Then I rolled the dough out. Much easier huh? It won’t stick to your rolling pin and your counter won’t be a mess! Roll it out to a good thickness, not very think and not paper thin. Put the crust in the fridge for at least 1 hour. The longer it stays in the fridge, the flakier it will be.

When I took the crust out of the fridge, I peeled of the plastic wraps and put the crust on a baking sheet that I had lined with parchment paper. Then I piled the filling in the middle of the crust, left almost 1.5 inch of the crust for folding. Then I folded the dough edges around over the berries. No need to cover all the berries or pressing anything. I had the oven preheated to 350F or 180C.

For the last touch, I brushed the crust with some milk and then sprinkled some brown sugar. My galette was in the oven for almost 55 minutes until the crust was golden brown and the filling was bubbly. Let it cool for 20-30 minutes and then serve it plain or with vanilla ice cream! 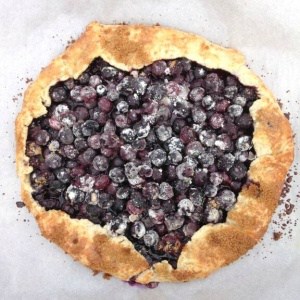 The dough has to stay in the fridge for one hour that has been added to the preparation time.
Did you make this recipe? Let us know how it was by leaving a comment and a 5-star review!
« Summer Berry Tart
Fresh Homemade Guacamole »