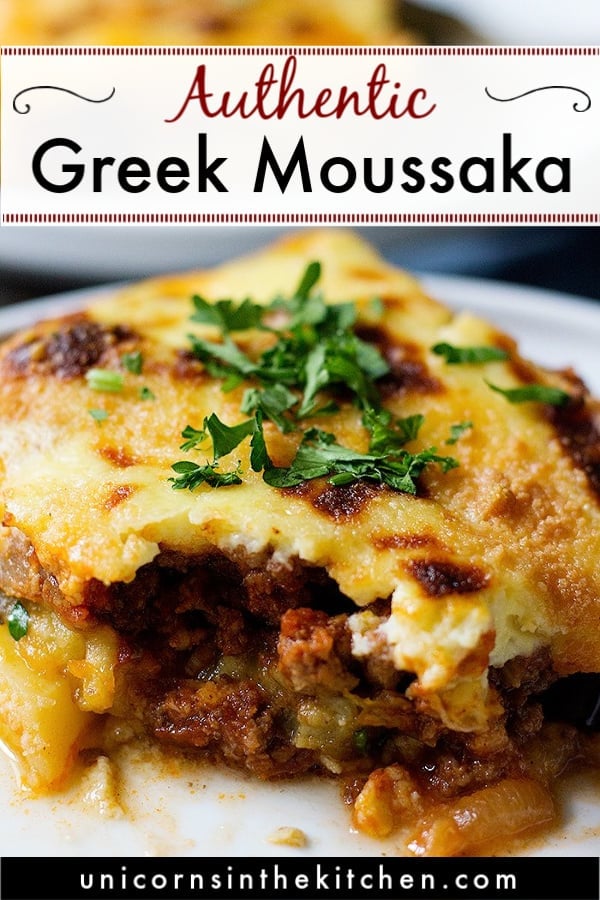 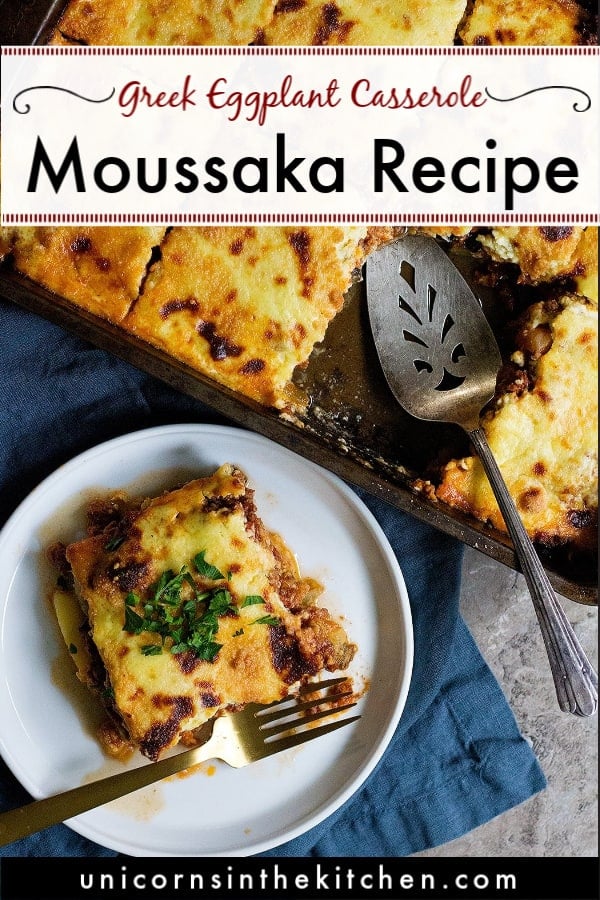 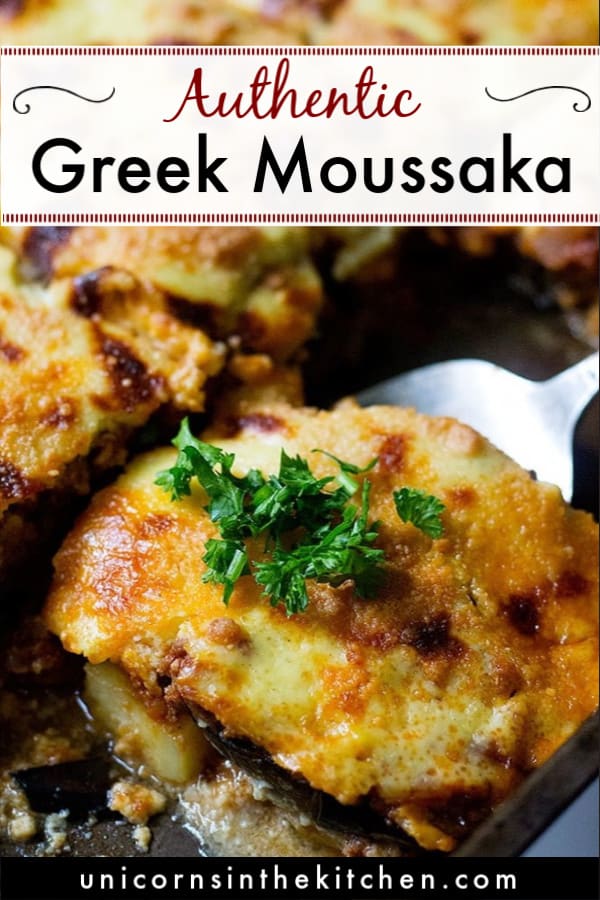 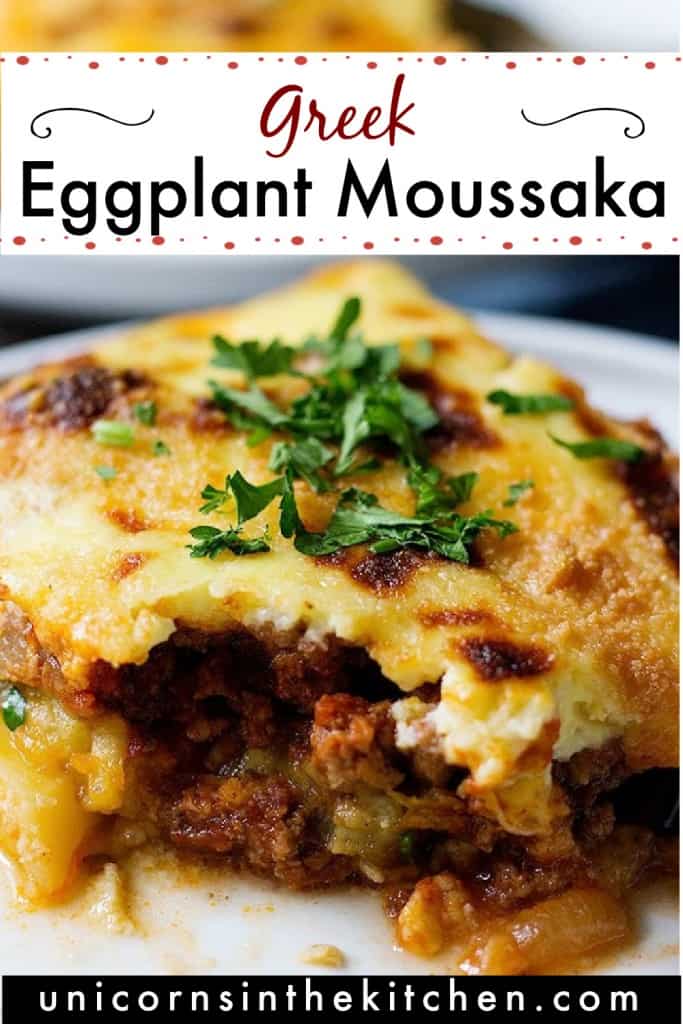 Moussaka is a classic Greek comfort food. Follow our step-by-step recipe to make this easy and comforting eggplant casserole.

We have some truly awesome Greek and Mediterranean recipes on the blog. Some of our all-time favorite recipes of Greek origin include Greek chicken souvlaki, pastitsio, and Greek meatballs (Keftedes) served with creamy tzatziki. Today, we're going to make another Greek classic: the mighty eggplant moussaka!

Moussaka is a traditional Mediterranean eggplant casserole that's been around for many, many years. Its main ingredients are eggplants, a ground meat sauce, and delicious creamy sauce used as a topping.

Is this recipe Turkish or Greek?

This is a common dish in the Middle East and the Mediterranean so it's very difficult to classify it as belonging to a specific country, though most Americans seem to think of it as Greek and it commonly found in Greek restaurants in the United States. The preparation of moussaka differs in Turkey, Greece and Lebanon. According to Clifford A. Wright, one of the first recipes for this dish was found in an Arabic cookbook from the 13th century.

Does it contain potato?

It depends on the region and, of course, the recipe. Moussaka can be made with or without potatoes. I love including potatoes because the starch turns it into a full meal and holds the dish together pretty well.

As mentioned before, there are four layers in homemade moussaka but don't let this scare you as this is not a complicated recipe. If you can make a casserole, you won't have a problem!

To make the first three layers, you need:

The fourth layer will be the creamy bechamel sauce, made with:

Prepare the eggplants and potatoes

Bring a pot of water to boil and preheat the oven to 400°F. Slice the potatoes and eggplants (½ inch thickness). Brush olive oil on the eggplants and coat the baking sheet with cooking spray.

While the eggplants are roasting, prepare the meat sauce by sautéing onion until golden brown. Add the ground beef or lamb to the onion and garlic and brown completely.

Add in crushed tomatoes, tomato paste and all the spices. The aroma of paprika and cinnamon will make your kitchen smell so good! Now that you have the potatoes ready, the eggplants roasted and the meat sauce completely cooked, it's time to make the bechamel sauce.

Melt the butter in a sauce pan over medium heat. Then stir in the flour and mix using a whisk. It should not turn into a hard paste, but rather a loose mixture of butter and flour.

Slowly add the milk (in four to five pours) to the butter and flour mixture and whisk very well after each addition, making sure no lumps are visible. Bring the mixture to simmer and cook until it thickens, which should take about five to seven minutes. As you can see in the photo below, the sauce is thick enough that it doesn't run off the wooden spoon.

Turn the heat off and season the bechamel sauce with salt and pepper. Then add eggs and parmesan cheese. Whisk well until the sauce is smooth and no lumps are visible.

Spread a thin layer of bechamel sauce at the bottom of a large baking dish (9x13) and then layer the potatoes on the sauce. Layer the eggplants on the potatoes and top with the meat sauce. Make sure it covers all the roasted eggplant slices.

Top moussaka with the creamy bechamel sauce and sprinkle more parmesan cheese on top. Bake in the oven for about 45 minutes and then get ready to enjoy this delicious meal!

Frying the eggplant vs roasting

Frying the eggplants will work just fine for this Greek moussaka recipe. I like to roast them because it's faster, easier and uses way less oil.

If you decide to fry the eggplants, please sprinkle some salt on both sides and let them sit in a colander for 30 minutes until they "sweat." Then rinse them with cold water and dry each piece using a paper towel. Heat vegetable oil in a pan over medium heat and fry them for about five minutes on each side, making sure they're soft but not burnt.

If you like the moussaka to have clean and nice slices, make sure you let it cool for about fifteen minutes and then, using a sharp knife, slice and serve it with a side salad such as classic Greek Salad, Mediterranean salad, or fattoush salad.

Can I make this vegetarian?

Yes, all you need to do is to leave the meat out and use a combination of veggies like green beans, mushrooms, zucchini and squash in the same recipe.

Can I freeze the leftovers?

Absolutely. Let moussaka cool completely and then slice and freeze. To eat, simply defrost in the fridge and reheat in the oven.

My bechamel sauce got so lumpy and not creamy at all, why?

The main reason could be that you didn't add the milk in steps. Stagger your pour - don't put it all in at once. You need to add the milk slowly so every time that it's added, it's combined well with the flour mixture. Also, the milk might have been too cold.

Yes! You can make all the layers a day before and assemble later. You can also assemble the layers and refrigerate for a day and cook later.

How can I keep the eggplant from getting mushy?

Make sure that the slices are not too thin because they will get too soft. Peel stripes on the eggplants instead of peeling them completely to help them keep their shape. 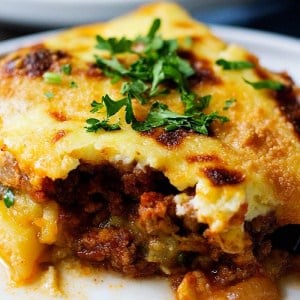 Calories: 309kcalCarbohydrates: 10gProtein: 20gFat: 21gSaturated Fat: 10gCholesterol: 109mgSodium: 678mgPotassium: 415mgFiber: 1gSugar: 6gVitamin A: 711IUVitamin C: 2mgCalcium: 197mgIron: 2mg
Did you make this recipe? Let us know how it was by leaving a comment and a 5-star review!

This recipe was created in partnership with the dairy farm families of New England.