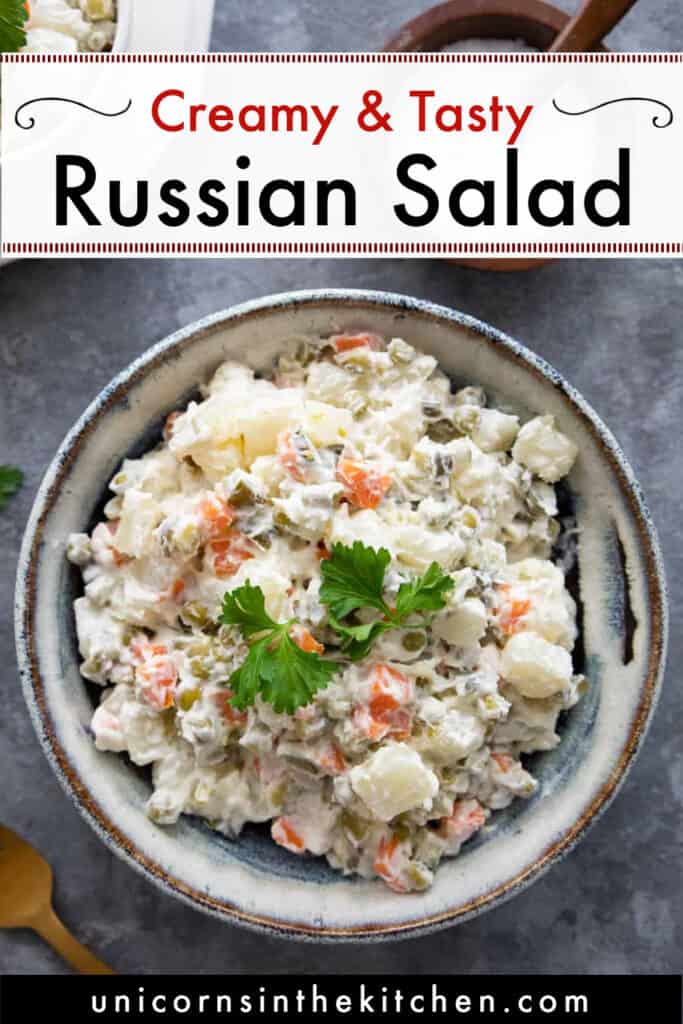 Here's an easy recipe for ensalada rusa - or, as many call it, Russian salad or Olivier salad. This creamy potato salad is full of vegetables and tastes great. Follow along to learn more about this popular salad and its variations.

It sure seems like there's no end to all the variations you can find on the simple potato salad. We've already checked off the Turkish and Mediterranean versions (both mayo-free) and today, I'm going to share with you the recipe for this Russian potato salad, also known as olivier salad that you can find all around the world, from Asia to South America.

All about this recipe

Growing up in Iran, my mom (and everyone else I knew) would make this potato salad with mashed potatoes, carrots, peas, pickles, hard boiled eggs and poached chicken called salad olivieh. It's always been a favorite and so easy to make.

Then I moved to Istanbul, Turkey and on my journey to find my favorite foods, I came across multiple occasions where a very similar potato salad, made with small, cubed potatoes instead of mashed, would be used to top sandwiches and kumpir (stuffed potatoes) or as part of a mezze spread. In Istanbul, they used to call it Amerikan salatası and I later learned that some call it Rus salatası as well.

Fast forward to a few years ago, on our trip to Spain, which involved endless tapas bar hops, we had the same potato salad, this time with tuna, known as, yes, you guessed it right, ensalada rusa. So it became my mission to do some research and see how the whole world knows about this salad, that I, as a kid, thought was an Iranian delicacy.

The origin and variations

This is a classic Russian recipe that originated in Moscow. It's named after its inventor, a Belgian chef named Lucien Olivier, of Hermitage restaurant - one of the city's top restaurants in the 1860s.

Russian potato salad is also popular in many other countries including Vietnam, Norway and Denmark. Each country has a variation of it using different ingredients. Though the recipe has been changed and modified many times through years, it's still popular in many countries. In France, it's known as olivier salad and in Iran it's called Salad olivieh and includes chicken whereas in Spain, it's called Ensalada Rusa and usually contains tuna.

As mentioned before, in Turkey, this potato salad is served with sandwiches and stuffed potatoes (kumpir), sometimes called Russian salad (Rus salatası) or American salad (Amerikan salatası). In Greece, you can find it in many restaurants with the name rossiki salata.

How to make Ensalada Rusa Or Russian Salad

This potato salad is loved around the world from Russia to Turkey, Iran, France, Spain and even Colombia. Each country and family has their own version. Here are a few ingredients you can add to this recipe:

This potato salad can be served on its own or as a side dish. In Iran, olivier salad is served with bread as a sandwich. In Turkey, it's served as a mezze or used to top sandwiches or kumpir (Turkish stuffed potato).

You can serve ensalada rusa with other Spanish tapas dishes such as patatas bravas, gambas al ajillo and pan con tomate.

You can also serve it on a mezze platter or as a side with dishes such as grilled spatchcock chicken, skillet chicken, Mediterranean style shrimp or meatballs.

Store the leftovers in an airtight container and refrigerate for up to 5 days. If the potato salad looks a little dry, add a bit more mayonnaise or yogurt before serving and give it a good stir.

Can I freeze Russian potato salad?

Because of the mayonnaise and yogurt, this salad won't freeze well.

Can I make ensalada rusa ahead of time?

Yes, you can make it up to 2 days in advance. 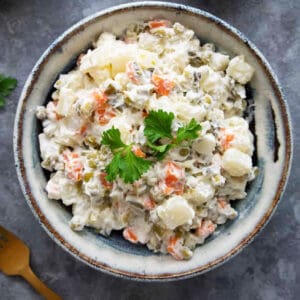