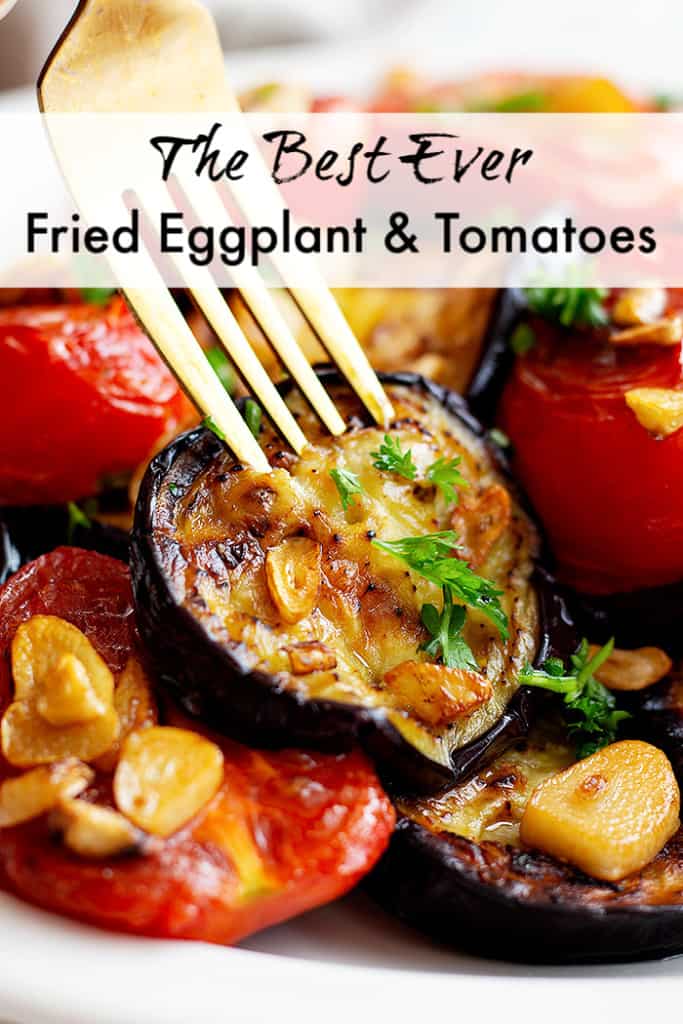 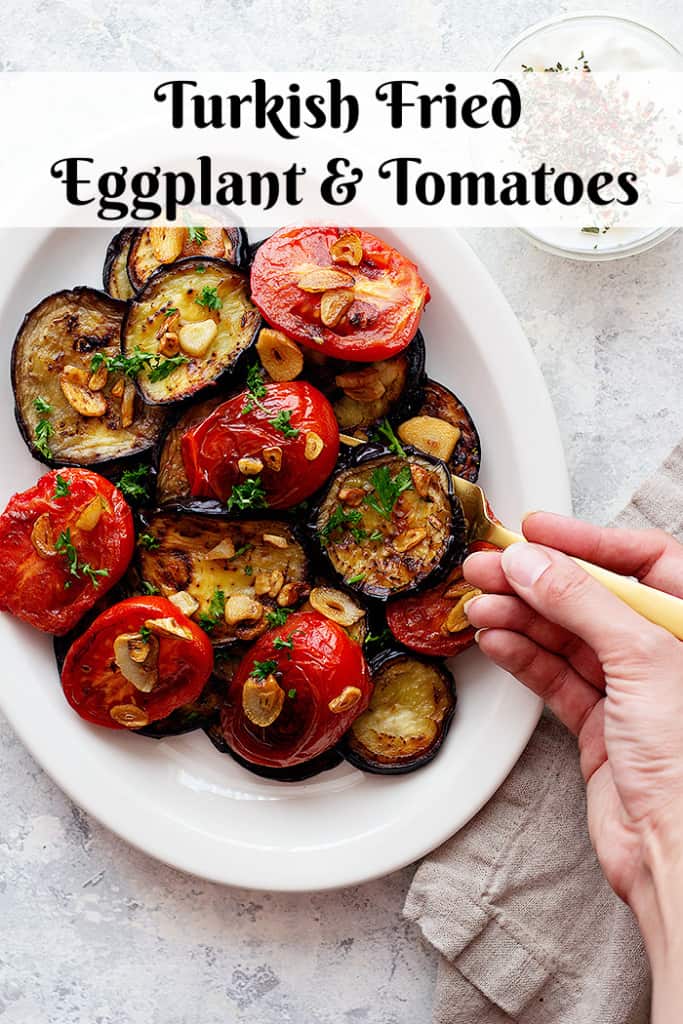 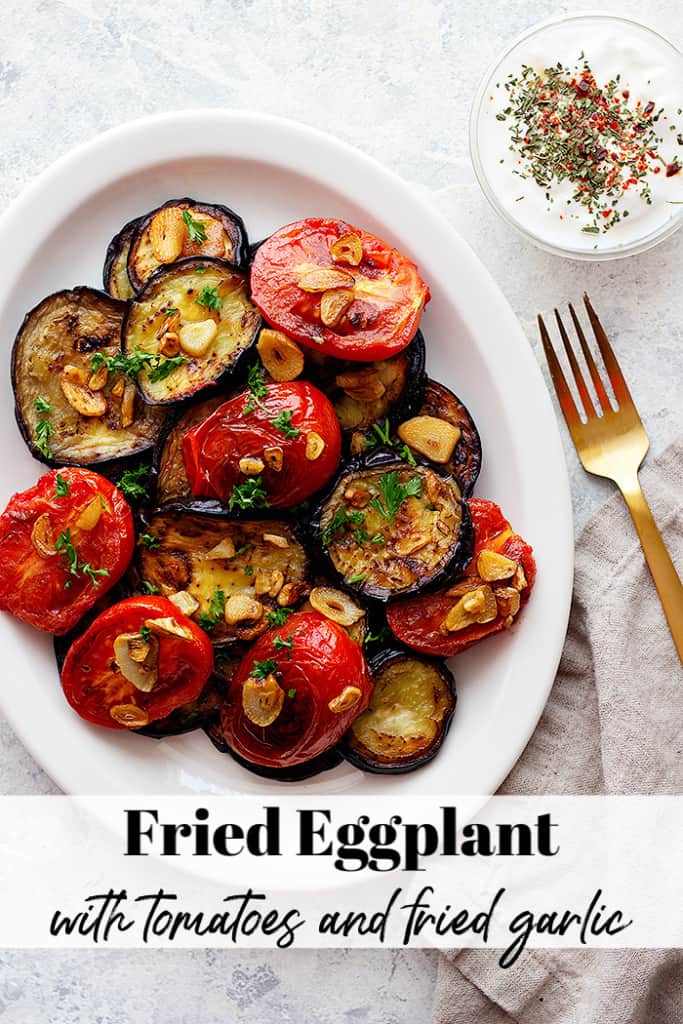 Fried eggplant with tomatoes are the easiest side dish. Fresh eggplant and tomatoes fried to perfection and are topped with crispy garlic. 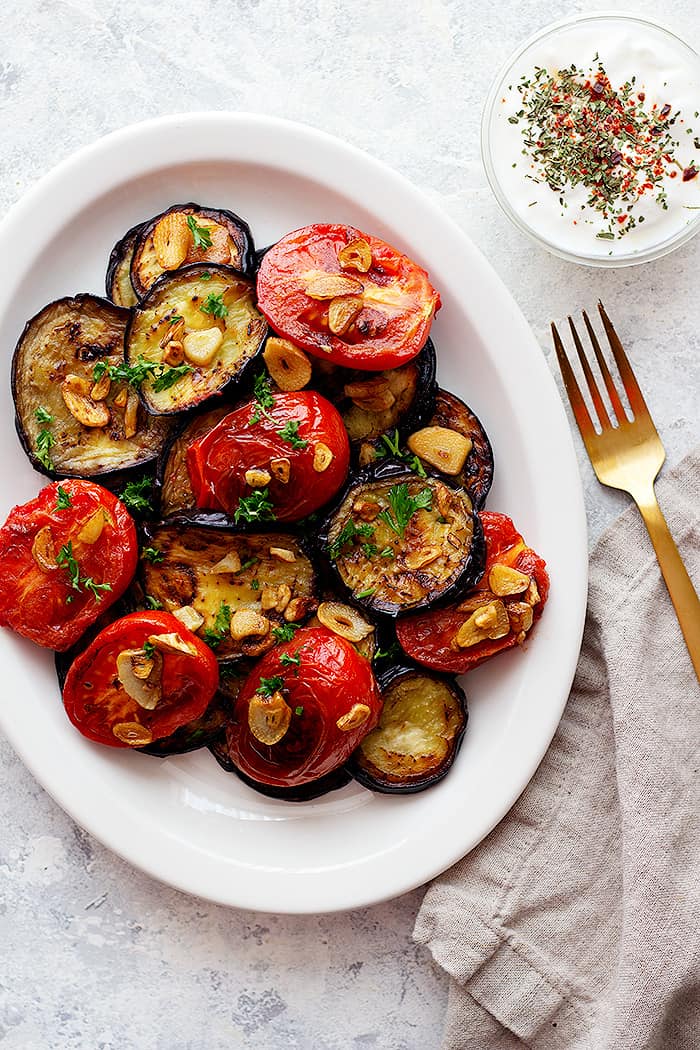 This is a classic Turkish appetizer or side dish that people usually make at home. Sometimes, fried green peppers are also added to the dish. Kizartmis means fried and patlican means eggplant. Turkish people love to serve it as a side dish to grilled meat because it's very simple to make and the flavors compliment each other pretty well.

What kind of eggplant is best for frying?

Almost any kind of eggplants would work in this recipe. I have made this recipe using Italian eggplants and globe eggplants. You can also use graffiti eggplant for this recipe. If using Chinese eggplant, peel them in strips and cut them in half lengthwise. Then proceed with the recipe. 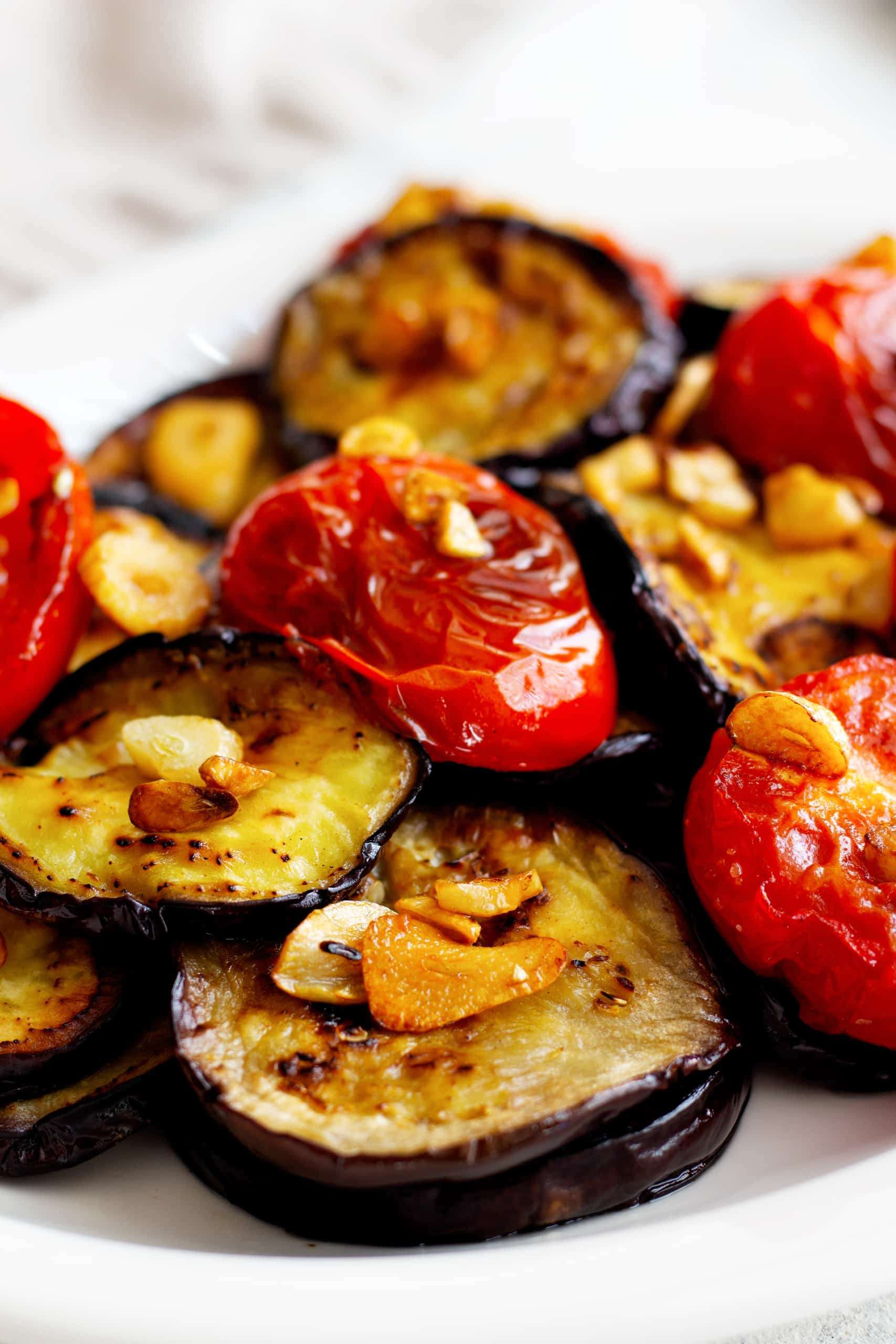 To fry vegetables such as eggplants, you need a type of oil that has a higher smoking point. I suggest using olive oil or avocado oil for frying. Keep in mind that the oil shouldn't smoke when it comes to frying. It simply needs to be hot and shiny. 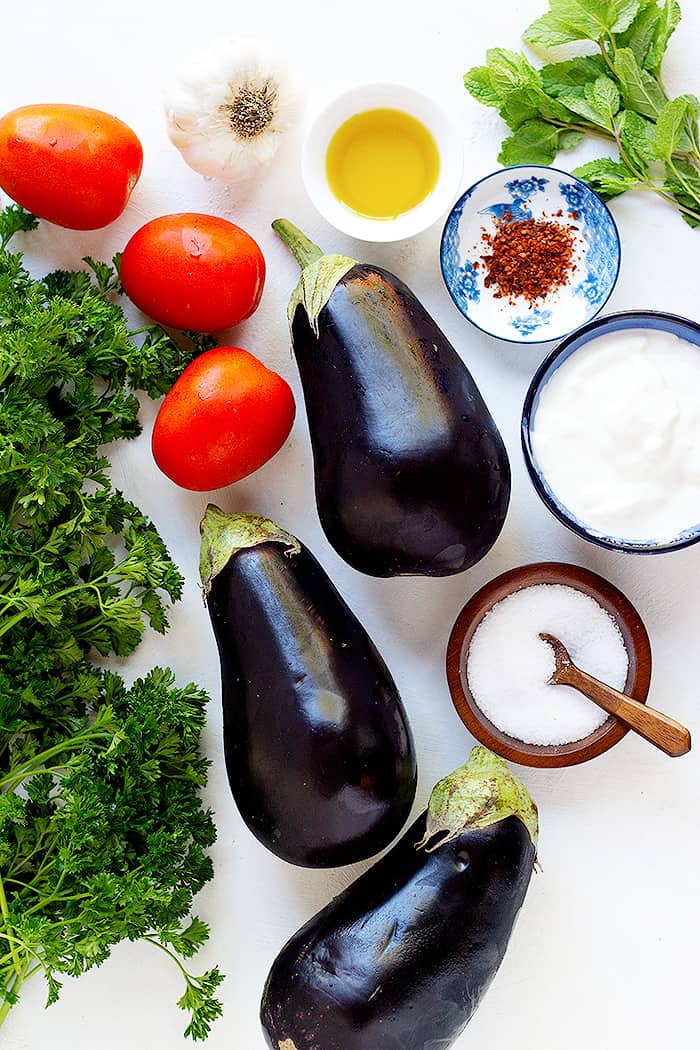 How to make fried eggplant recipe 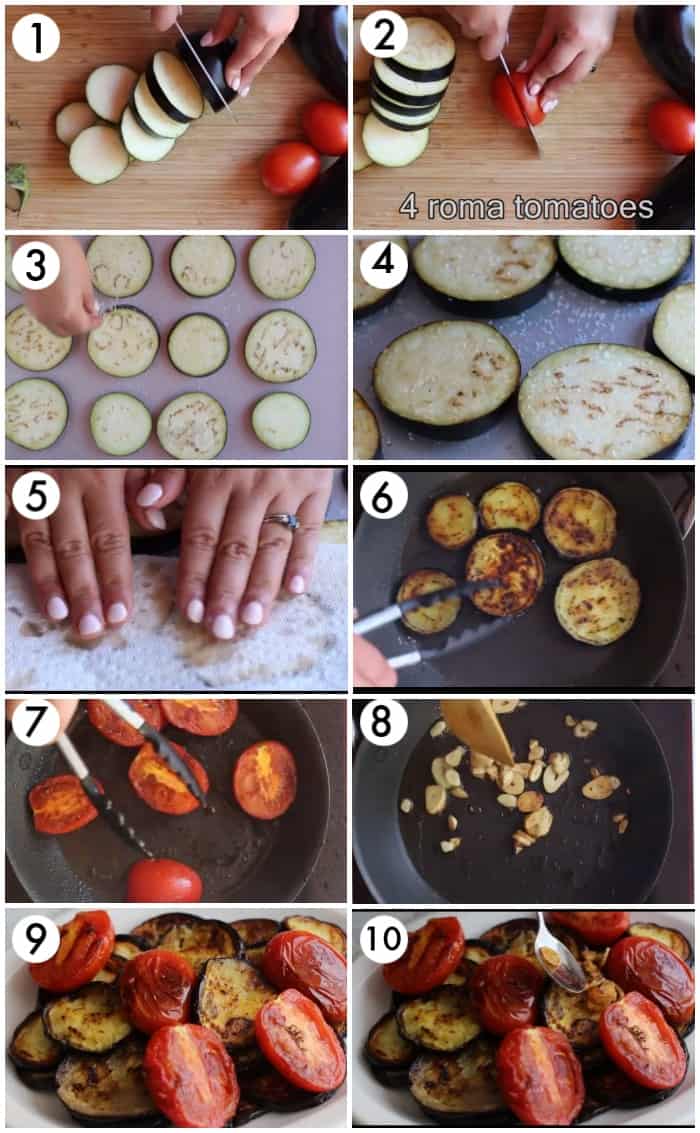 How do you keep fried eggplants from getting soggy?

What goes good with fried eggplant?

Essentially, fried eggplant and tomatoes are served with a simple yogurt sauce made with yogurt, salt and dried mint. It makes a wonderful side dish to dishes such as beef shish kabob or shish tawook. You can also serve it with some Turkish bulgur pilaf as a complete vegetarian dinner. 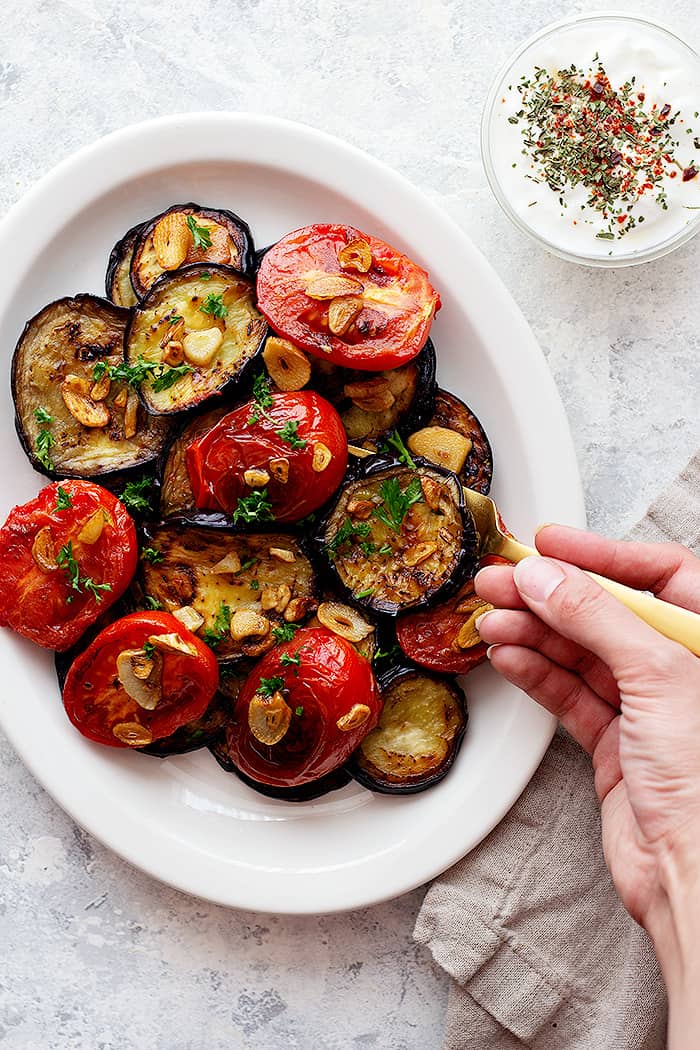 Can I freeze fried eggplant?

While raw eggplant doesn't freeze well, fried eggplant freezes beautifully. My mom used to have fried eggplant in the freezer for Persian eggplant stew and she would use it regularly. Once the eggplant is at room temperature, place the slices in a freezer bag and freeze for up to three months. To use, thaw them in the fridge overnight and then heat them with a drizzle of olive oil in a non stick pan.

A few notes and tips to make this recipe 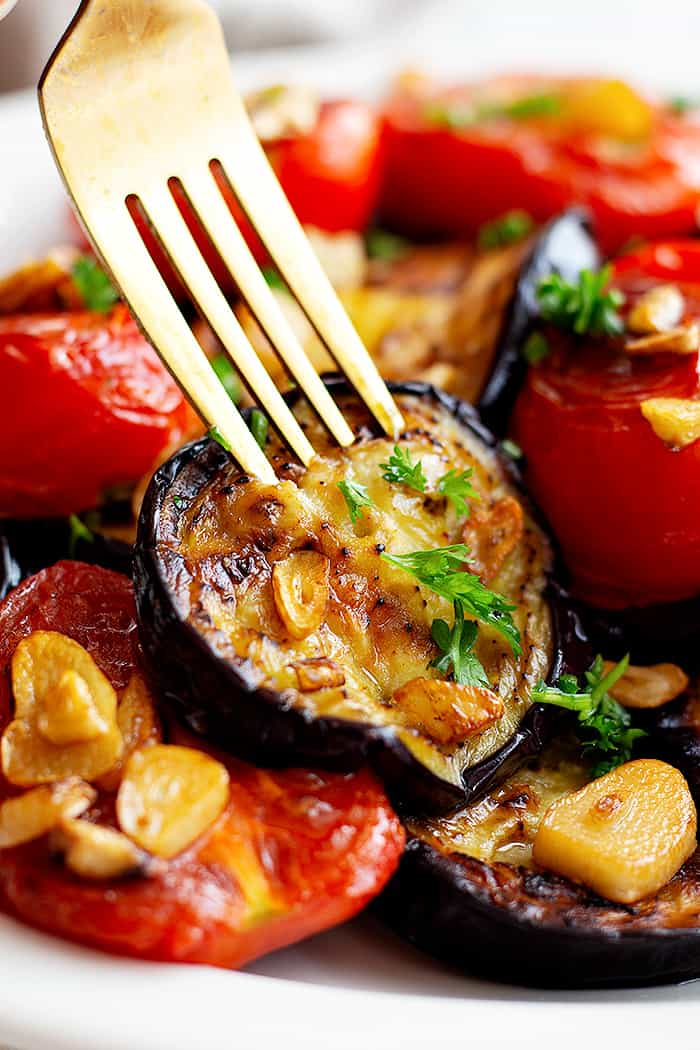 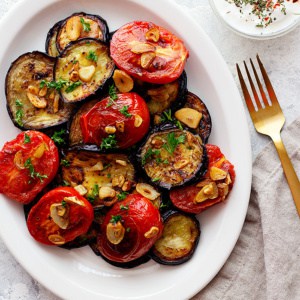