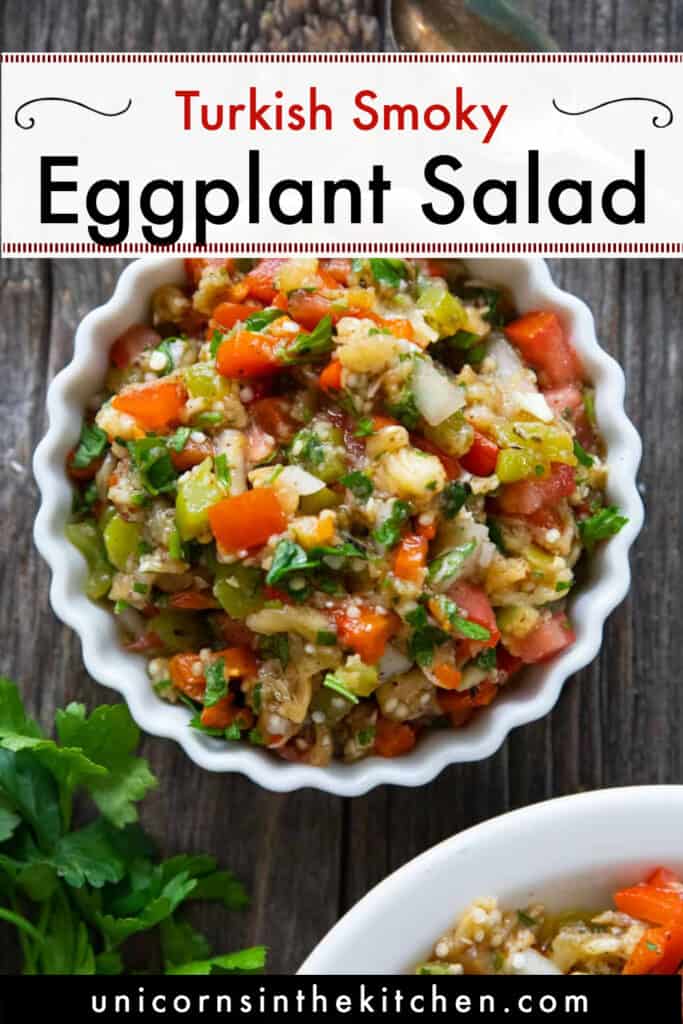 This Turkish eggplant salad is uniquely delicious. Charred eggplant and bell peppers are combined with tomatoes, herbs and spices for a delightful convergence of flavors. Like other Mediterranean salads, key ingredients include olive oil, lemon juice and sumac.

If you've been a long time reader, you know eggplant if one of our favorite ingredients. When it comes to eggplant recipes, we love them all; from baba ganoush and Middle Eastern eggplant to hearty karniyarik (Turkish stuffed eggplant). This Turkish style smoky eggplant salad is another favorite that I cannot wait to share with you. It goes well with many Turkish dishes and even eggplant skeptics love it!

Charred and smoky eggplant has a special place in the Persian, Middle Eastern and Mediterranean cuisines. Just like melitzanosalata and mutabal, this recipe also calls for the eggplants to be charred on an open flame, preferably your gas range (instructions for the roasted version below).

If you're looking for more ways to use charred and smoky eggplant, try mirza ghasemi, an Iranian dish made with eggplants, tomatoes and eggs.

If you don't have a gas range, you can roast the eggplants and bell peppers by following these instructions:

This smoky eggplant salad makes a nice addition to any mezze platter alongside some hummus, fried halloumi and dolma. Even though it's called a salad, I love having it with some bread such as lavash, pita or Turkish pide bread as a light lunch.

You can also serve it as a side with dishes such as roasted chicken and vegetables, shish tawook, kofta kebab or beef shish kabob.

Can I roast the eggplant instead of charring it?

How long does eggplant salad keep?

Store the leftovers in an airtight container and refrigerate for up to 3 days. It's best to drizzle with some olive oil before serving.

Do I need to salt the eggplant or soak it for this recipe?

While I'm a firm believer in soaking and salting the eggplant before roasting and frying, I skip this step when charring on an open flame. I find that it doesn't make much difference when charring.