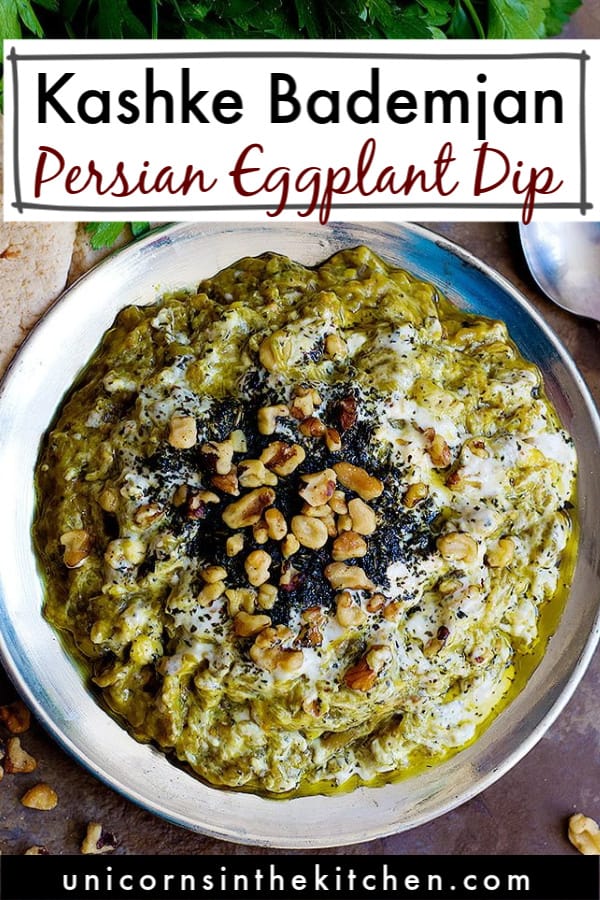 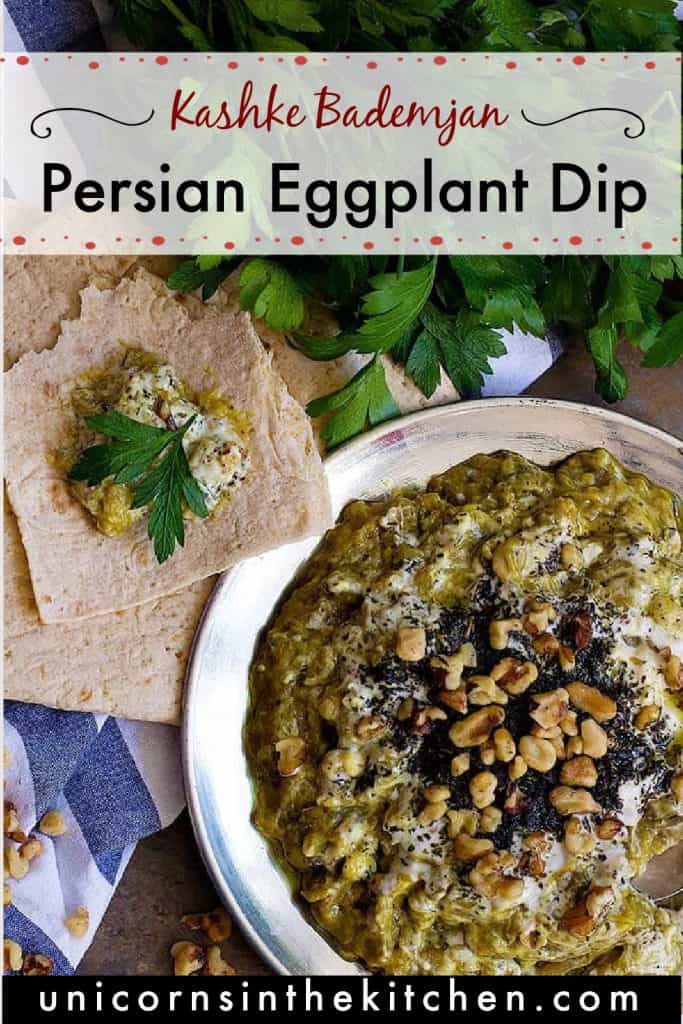 Kashke bademjan is a simple Persian eggplant dip that is made with a handful of ingredients. This easy and tasty vegetarian dip is full of amazing flavors and makes for a perfect appetizer served with some warm bread.

Some might think that Persian recipes are intimidating, but it's important to know that there are plenty of Persian recipes that are simple and easy to make. Some easy Persian recipes that we've written about on this blog include Persian eggplant and tomatoes and eggplant stew. Today's recipe, kashke bademjan, is one of the easiest yet tastiest Iranian recipes out there - perfect for Persian food newbies and lovers of Mediterranean dips! 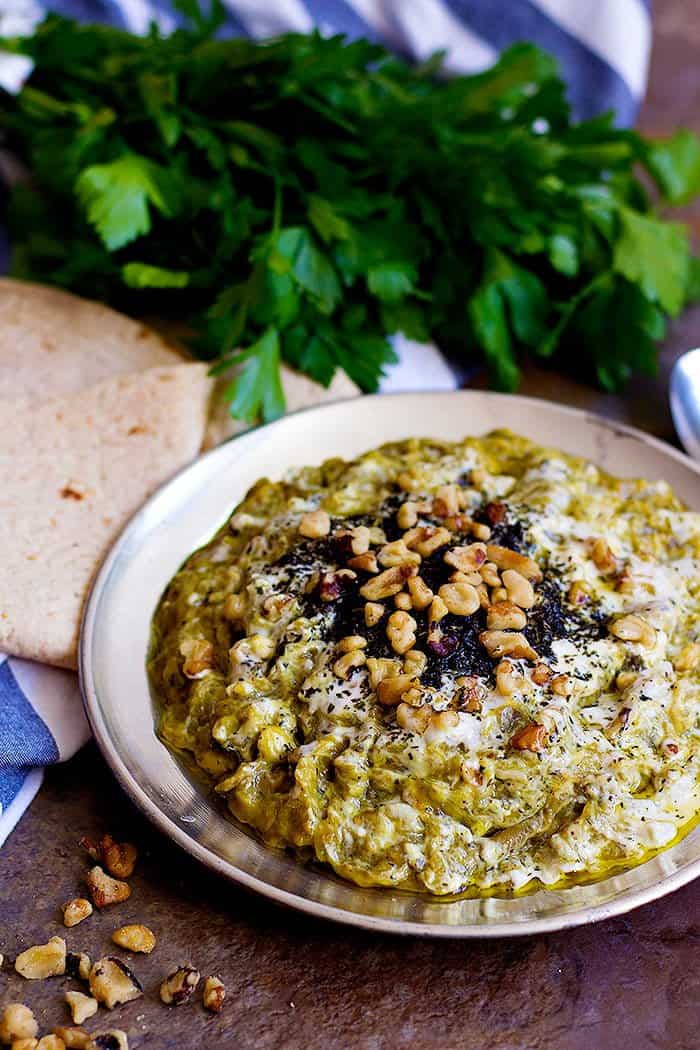 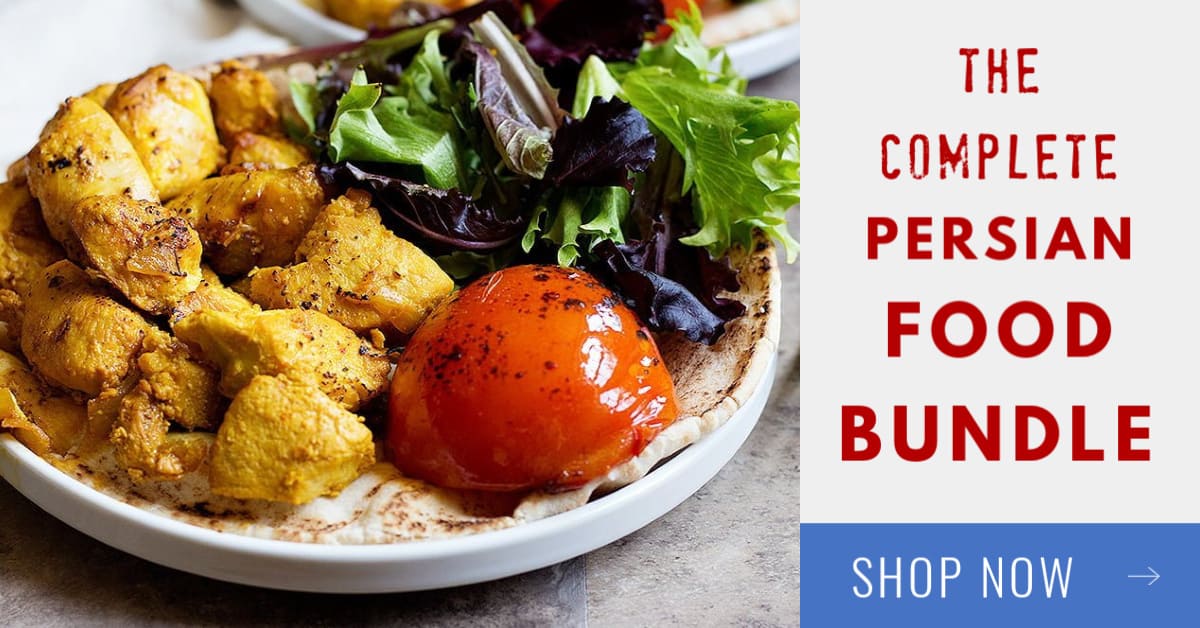 Eggplant is one of those vegetables that is sometimes overlooked. However, there are so many tasty recipes including healthy and easy dips that use eggplant. From classic baba ganoush to delicious Greek Melitzanosalata, eggplant dips always make a grand appearance at our appetizer table.

Have you ever had that dish that makes you think to yourself, "I seriously don't know what it is about this dish, but I want to have it for the rest of my life?" Kashke bademjan is that dish for many people. You might have had it at a friend's home, or at a Persian restaurant, or probably at a potluck. I'm sure that if you've had it, you've most definitely loved it, and have thought of making it yourself. So, here is a full guide and step by step recipe to make this delicious Persian appetizer.

Kashke bademjan, occasionally also spelled kashko bademjan, is the name of a Persian eggplant dip. Kashk means yogurt whey, a dairy product made of drained yogurt which has a salty and tangy flavor, and bademjan means eggplant. This dish is basically made from the combination of these two ingredients. 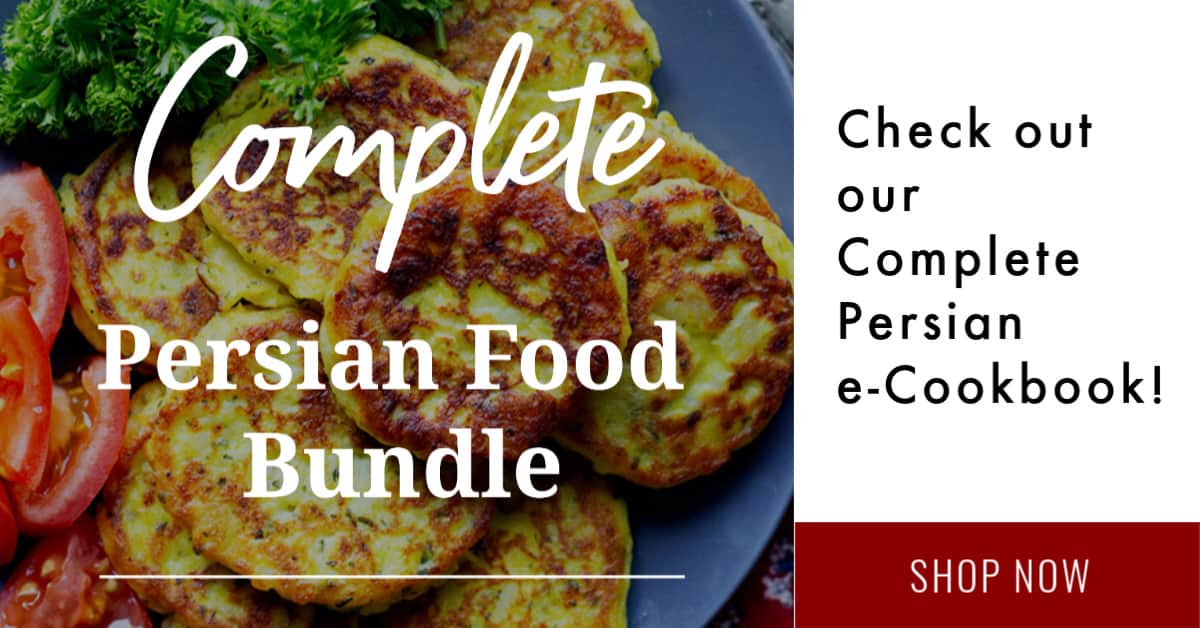 Kashk is an Iranian kitchen staple that's usually used in Ash (thick soup) such as ash reshteh and eggplant soup. Yogurt whey or kashk comes in dry or liquid form. The dry form can be round, or it can be formed as a string or a powder. It should be kept in a cool, dry place. To use prepare dry kashk, place some in a bowl and cover with boiling water. Wait for some minutes and then stir until it's dissolved in water. The liquid form, however, should be kept in the fridge and can go directly into a recipe. I personally prefer dry kashk as it makes it easier to adjust its flavor and consistency. You can find kashk in Persian/Middle Eastern shops (usually in the refrigerator) or online. 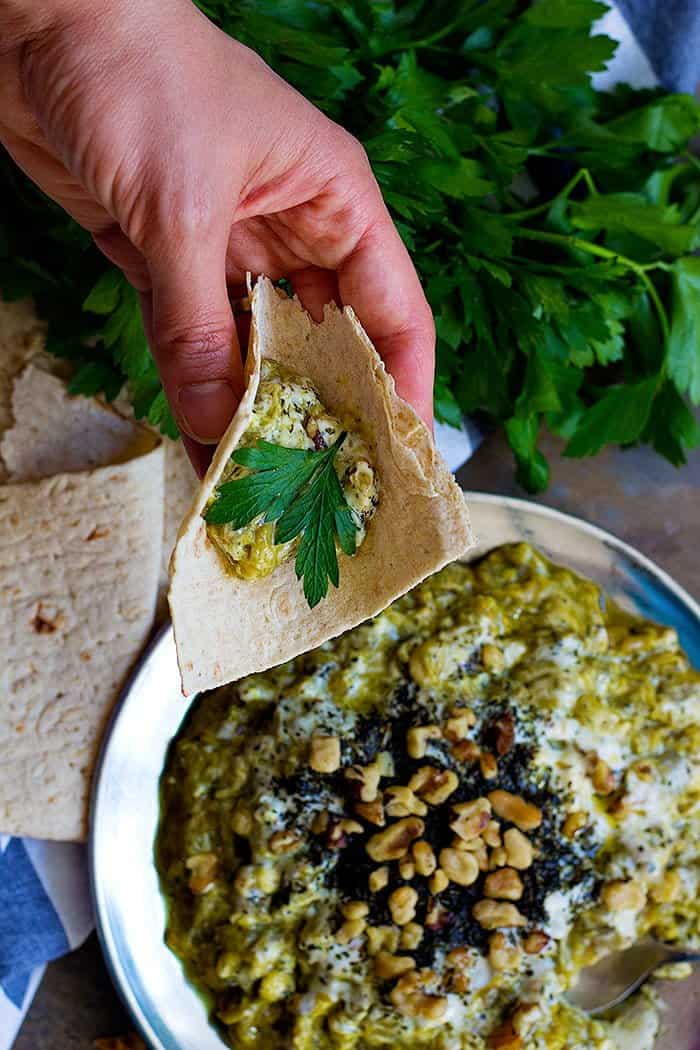 This Persian eggplant dip can be made in many different ways. The most essential recipe calls for eggplants, onion, garlic and kashk. The first and more traditional method of making kashke bademjan is to fry the eggplants, onion and garlic separately until they're golden brown. Then, mash the eggplants well and mix with onion, garlic and kashk. This is quite easy and simple, but note that this method calls for more oil as eggplants absorb so much fat.

To minimize the use of oil, you can either bake the eggplants and proceed with the recipe, or you can use a stove top method as follows. Start with browning the peeled and halved eggplants in a pan, transfer them to a plate, and, in the same pan, saute some onion and garlic. Put the eggplants back in the pan and add turmeric and black pepper. Stir and mix well. Add in some water, then cover and cook for about ten to fifteen minutes until the eggplants are fully cooked. Mash the eggplants and onion mixture well.

Next, add the kashk, bloomed saffron and some dried mint to the dish, stir well and cook over medium heat for about five to ten minutes. This would help the flavors combine better.

Toppings for this Persian eggplant dip

I always like to go ahead and add some sauteed dried mint on top with some extra kashk and chopped walnuts for extra crunch and texture. You can also add caramelized onion on top. 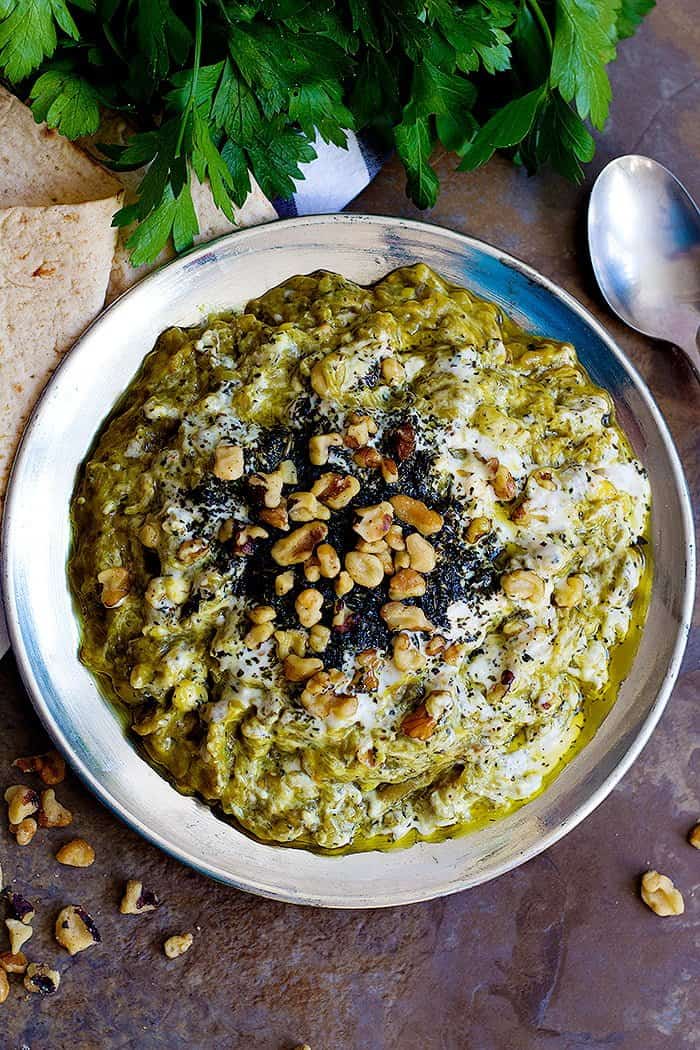 What makes this different than other eggplant dip recipes?

Kashke bademjan is served warm or at room temperature whereas most eggplant dips are served cold. This particular eggplant dip recipe lists eggplants as the main ingredient and uses kashk (yogurt whey) to add more flavor to the dish. This eggplant dip makes a great appetizer for family gatherings or dinner parties.

How to serve this Persian eggplant dip 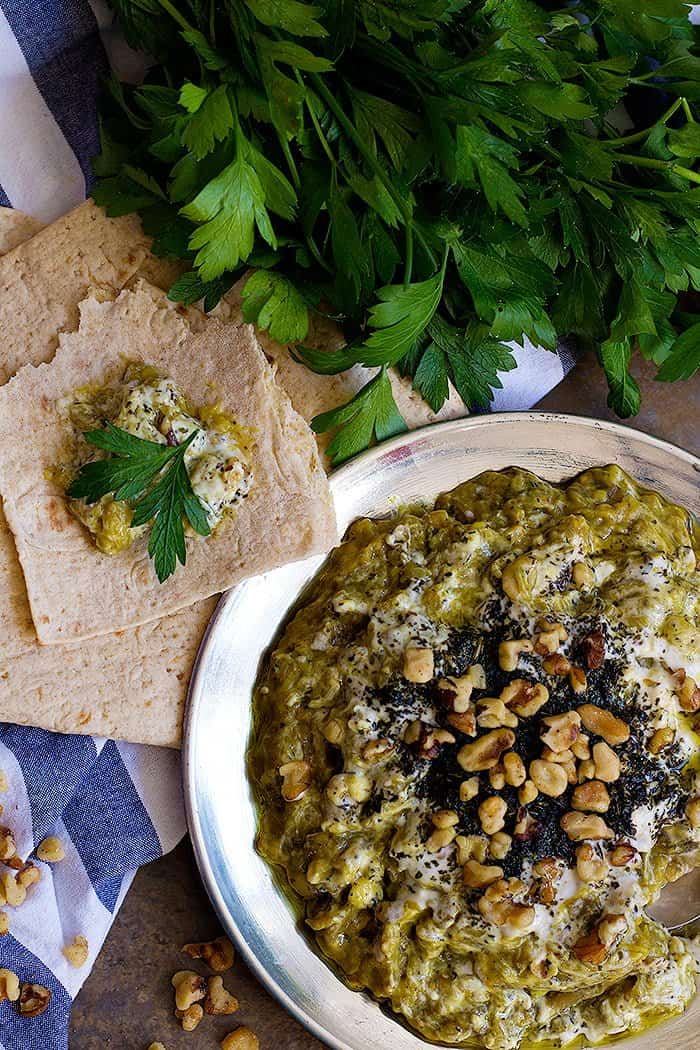 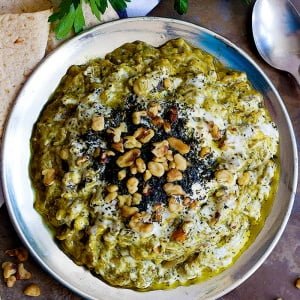