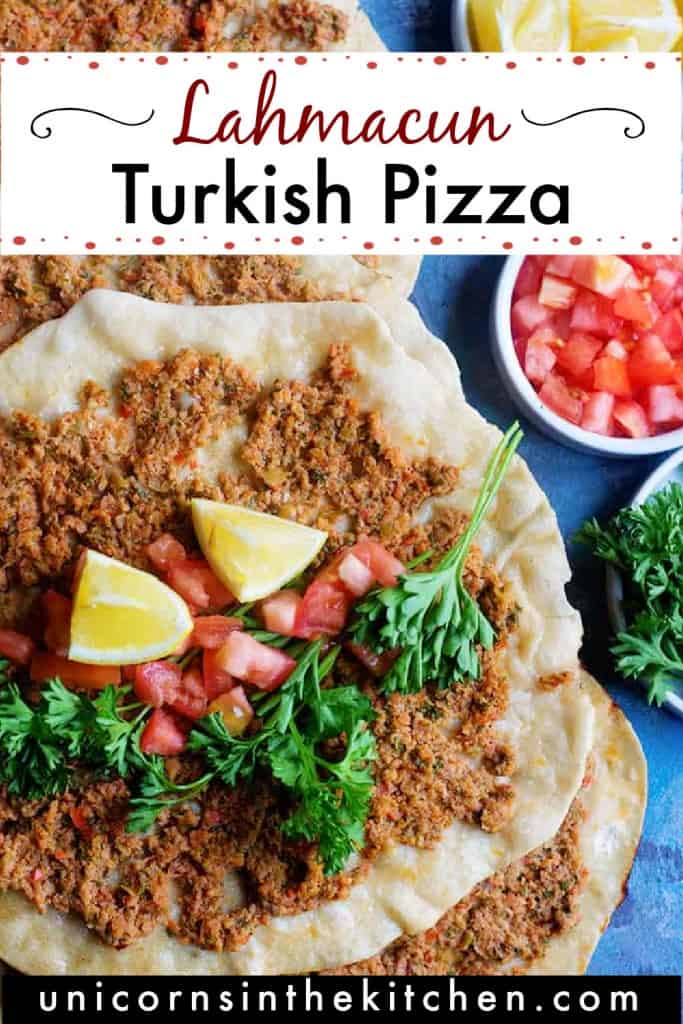 Lahmacun is thin and crispy flatbread bursting with flavor. Topped with meat, parsley, peppers, tomatoes and a mixture of delicious spices, this pizza-like Turkish recipe is a must-try!

Living in Istanbul for a few years made me fall in love in Turkish cuisine. We've shared many Turkish recipes here including simit, kumpir, stuffed eggplants (karniyarik), borek, and doner kebab. Today's recipe is one of our absolute favorites that you can find anywhere in Turkey. It's called lahmacun and it's basically a crispy thin flatbread - you could even say it's something like a pizza - topped with the best meat mixture ever.

Lahmacun (pronounced Lah-Ma-Joun) is a crispy and thin flatbread topped with a combination of minced meat and vegetables. It's also referred to as Turkish pizza, Armenian pizza, Syrian pizza and Lebanese pizza in some recipes and translated restaurant menus. Unlike pizza, lahmacun doesn't contain cheese and is mostly topped with ground beef or lamb.

Lahmacun is of Middle Eastern origin, specifically the Levant. Variations of it are popular in Turkey, Armenia, Lebanon and Syria, all of which were once part of the Ottoman Empire.

Pide and lamacun (note that there are a few different acceptable spellings) can often be confused. Lahmacun is very thin and is often eaten like a wrap whereas pide is boat-shaped and has a thicker crust. Moreover, pide usually contains cheese and comes with different toppings such as vegetable and cheese or a mix of beef and vegetables.

Like gozleme, the dough used to make lahmacun is a simple and basic one made of flour, water and salt. You don't need yeast to make this dough as it's going to be flat and not fluffy. As a shortcut, you can use pizza dough for this recipe, however I personally prefer to make the dough from scratch to get the authentic texture and flavor.

All the flavor of lahmacun is in the topping and it's made of the following ingredients.

Pro tip: Years of living in Iran and Turkey - and savoring Middle Eastern and Mediterranean food - has taught me that nothing elevates a dish like fresh ingredients, a good selection of spices and a lot of herbs. It's best to be generous with all the fresh ingredients.

How to make lahmacun

Traditionally, lahmacun and other Middle Eastern and Mediterranean flatbreads are made in stone ovens (Masonry ovens) called tanoor or tandoor. I love making lahmacun in a pan with a lid because it provides that hot Tandoor-like environment that we're looking for. That being said, you can also make this recipe in the oven:

Nowadays you can find different variations for lahmacun around Turkey. Even though the classic version doesn't have cheese, you can try peymacun which is basically the classic lahmcun topped with kasar and feta cheese.

Another variety is cevizli, which one adds some crushed walnuts to the meat and vegetable mixture.

Even though some like to compare Turkish lahmacun to pizza, it definitely isn't served like pizza. To serve lahmacun, top it with sumac onions, fresh parsley and tomatoes and squeeze some lemon juice. Season with some sumac and Aleppo pepper (if you like it spicy) and make it into a wrap. Bite into this delicious wrap and enjoy it with a cold glass of homemade ayran.

If you are looking for side dishes, you can try cacik (yogurt and cucumbers), white bean salad or gavurdagi (tomato walnut salad).

How do you store lahmacun?

Store leftovers in an airtight container and refrigerate for up to 3 days. You can reheat it in the oven when ready to serve.

How can I freeze this?

It's best to freeze cooked lahmacun because you can easily heat them in the oven. Once they are cool, place them on top of each other, with wax paper or parchment paper between every lahmacun so they don't stick to each other. Wrap the whole stack in aluminum foil and freeze for up to 2 months.

To reheat, preheat the oven to 350°F and place them on a baking sheet. Heat the lahmacun (out of the fridge or frozen) in the oven for about 10 to 20 minutes until completely heated through and warm. Serve with tomatoes, parsley and lemon juice.

Is there a gluten free option?

You can make the dough using a measure for measure gluten free flour. 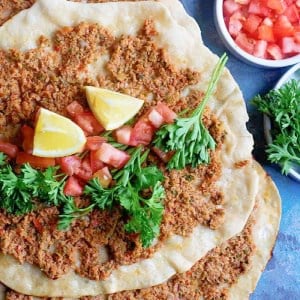