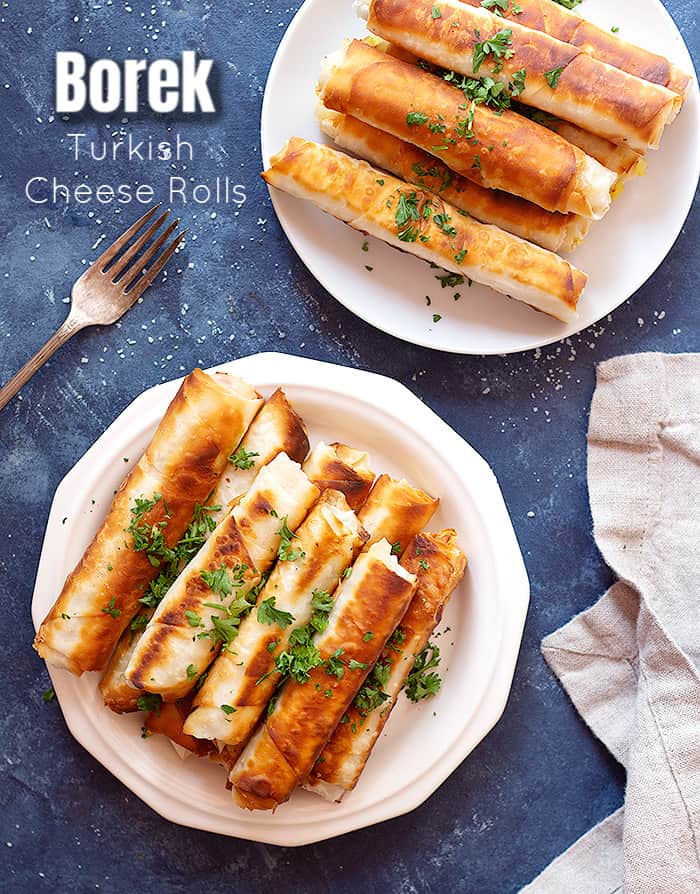 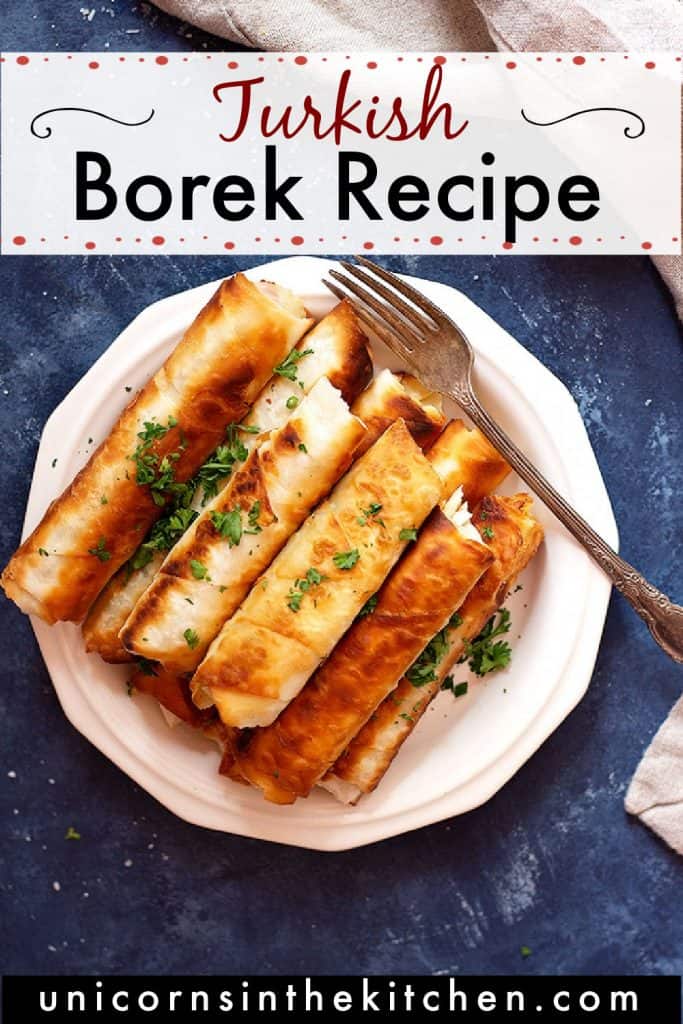 Borek is a Turkish savory crunchy pastry filled with different fillings such as cheese or potatoes. They are perfect as a midday snack or for breakfast and you can make them in advance and freeze them for later. Learn how to make this sigara borek recipe by watching our step-by-step video and tutorial.

Since we lived in Istanbul for years, Turkish recipes became part of our routine. Today I'm showing you one of the Turkish classics called borek which some might call crispy phyllo rolls. You can serve it as an appetizer and mezze alongside Turkish lentil meatballs, white bean salad and Kisir (Turkish bulgur salad).

Börek is a family of stuffed pastries made of thin dough such as yufka or phyllo (note that these two are different). It's of Anatolian origins and is also common in the cuisines of Balkans and Mediterranean. This Turkish savory pastry can be prepared in a large pan and cut into pieces or prepared as individual pastries. It's believed that borek is originated in Turkey, however nowadays it can be found in many countries from Armenia to Bulgaria and Albania.

Borek is one of the most popular dishes in Turkish cuisine and it was a staple in Ottoman cuisine as well. Borek can be made with different fillings such as spiced lamb, spinach, potato or cheese. You can find borek shops called Börekci in every corner in Istanbul. Turks have borek for breakfast, midday snack or as part of a mezze platter. If visiting Turkish resorts on the Mediterranean, you might find boreks with the name crunchy cheese rolls in their English menu.

The recipe we are working with today is called sigara boregi which literally translates to Cigar Borek. This type of borek is very common among Turkish households and everyone loves it.

To make Turkish borek you need two items: Yufka dough and a filling. Here we have three fillings for our borek recipe: Potato, spinach and cheese. The fillings are somehow similar to the ones used in Gozleme (Turkish stuffed flatbread).

To make spinach borek, you need onion, spinach and some kind of white cheese such as feta. As for potato borek, it's common to use a combination of potatoes, Aleppo pepper (pul biber) and salt. And for the simple cheese borek, one uses a combination of white cheese (such as feta), parsley and some black pepper. As you can see, the filling for borek is usually very simple and that's why it's a great option for breakfast or a midday snack.

Pro Tip: The traditional cheese used in borek is called lor peyniri. It's a high protein, low-fat and low-salt cheese that is soft and easy to mix with other ingredients. If you have a Turkish store near where you leave and you can get your hands on some lor cheese, that would be perfect. However, you can also use Turkish white cheese called beyaz peyniri or simply feta cheese.

Making borek is easy and simple. Once you make the fillings, it's time to roll the borek and cook them. Please make sure to watch the how-to video for the complete tutorial.

For spinach filling, saute onion in some olive oil until golden, add in chopped spinach and cook until the spinach is wilted and cooked. Mix spinach with cheese, salt and pepper.

To make potato filling, boil the potatoes until cooked and fork tender. Mash them in a bowl and add salt, black pepper and Aleppo pepper.

Classic cheese filling is the easiest filling since there is no cooking involved. Simply mix the cheese with chopped parsley, salt and black pepper.

Place a triangle shaped yufka dough on a surface, with the wide side facing you. With a wet finger, moisten the edges of the triangle. Then place about one to two tablespoon of filling one inch away from the wide edge and shape it like a thin log. Fold the outer corners over the filling and roll the borek. Dip your finger in water and wet the edges again and roll tightly. Set aside and continue with the remaining yufka and filling.

Heat 2 tablespoons vegetable oil in a non stick pan over medium heat. Once hot, place the boreks in the oil and fry on all sides until crispy and golden. Don't over crowd the pan. Place the boreks on a kitchen paper towel to absorb the excess oil.

Borek is more than just a simple Turkish dish. It's a way of life, it's meant to be eaten any time of the day when you want to take a break and enjoy a snack or meal.

Serve this classic Turkish pastry with tea as breakfast alongside cilbir or menemen or a midday snack. You can also serve borek as a main meal with a light side dish such as gavurdagi, sauteed spinach or cacik.

Can I use phyllo dough instead of yufka?

Even though Turkish people usually use yufka to make borek, it's also possible to make this recipe using phyllo (filo) dough. To do so, place a sheet of phyllo dough on a clean surface and cut it into 4 wide strips. Then add the filling and fold in the edges on both sides over the filling.
Roll them into cigar shapes and cook as instructed. Make sure to cover the extra phyllo dough with a damp towel at all times since it dries out fast.

What's the difference between yufka, phyllo and puff pastry?

Classic borek is made with yufka dough which is an extra thin dough. Filo or phyllo is even thinner than yufka but still can be used to make borek. Puff pastry on the other hand, is a completely different type of dough since it has several layers.
Traditionally, puff pastry isn't used to make borek or sigara borek (rolled borek). But that doesn't mean you can't make it using puff pastry, it just wouldn't have the exact flavor and texture as the traditional borek. If using puff pastry, you need to bake the sigara borek in the oven at 350°F for 20 to 25 minutes instead of frying them.

Can I freeze borek?

Since borek making can be a time consuming task, I suggest you put the time and make a large batch. You can easily freeze borek. To do so, follow the recipe and make the fillings and assemble the borek rolls. Don't fry the boreks.
Place them on a baking sheet lined with parchment paper and freeze for one hour. Then place them in freezer safe bags and freeze for up to three months. To cook, thaw them in the fridge overnight and once they're completely thawed, fry them in vegetable oil as instructed n the recipe. 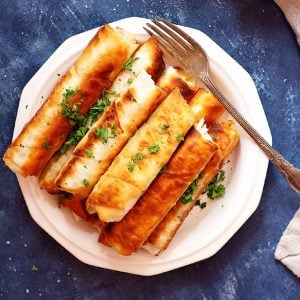 Shadi HasanzadeNemati
Borek is a Turkish savory crunchy pastry filled with different fillings such as cheese or potatoes. Learn how to make Turkish borek recipe by watching our step-by-step video and tutorial. They are perfect as a midday snack or for breakfast and you can make them in advance and freeze them for later.
5 from 16 votes
Print Recipe Pin Recipe
Prep Time 40 mins
Cook Time 20 mins
Total Time 1 hr
Course Appetizer
Cuisine Turkish
Servings 4 servings
Calories 347 kcal

To assemble and fry