Ready in just 5 minutes, this Lebanese seven spice mix is used in many Middle Eastern dishes. This aromatic spice is made with a few pantry staples.

Middle Eastern and Mediterranean recipes offer a variety of dishes that are made with simple wholesome ingredients. Just like Persian advieh, this recipe is used in various dishes to make them more aromatic and flavorful.

Seven spice is a mix of spices that's widely used in Levantine cuisine including soups, stews, rice or meat dishes. It's often called baharat in Arabic which means spices.

Each family and region has their own way of making this recipe and uses different spices and ratios. You can even find different versions of this spice mix in different shops.

It's always a good idea to have a jar of this spice blend on hand since it can be used in many different recipes and you can keep it fresh for months.

As I mentioned previously, there are numerous versions of this spice mix and the ratios and spices could vary from family to family. Here are the spices I use to make baharat:

How to make seven spice blend

Some like to toast and grind their spices from whole, I usually get ground ones to speed the process a bit.

Mix all the spices in a bowl or a plate. Make sure all is combined well. Store it in an airtight glass jar in a cool and dry place.

There are different version of baharat. Some include cardamom, fenugreek or ginger. You can also find different baharat recipes for different countries. For example, Lebanese version is different from Iraqi or Syrian versions.

This spice blend is a staple in Levantine cuisine and can be used in many different recipe including bamya (okra stew), kibbeh, stuffed eggplant, stuffed grape leaves (dolma). You can also add it to soups such as Mediterranean lentil soup or to hummus. It would also make a nice addition to roasted vegetables or salads such as roasted cauliflower salad.

How long can I keep this?

You can store the spice blend in an airtight jar and keep in it a cool and dry place for up to 6 months.

Can I use this blend for marinade?

Yes, you can use it to marinade any kind of meat or seafood. I love mixing it with olive oil and use it as a marinade for grilled spatchcock chicken. You can also use it to flavor vegetables.

Where can I can get quality spices from?

It's best to know the source of your spices. I like buying mine from Middle Eastern, Mediterranean or some Indian stores. 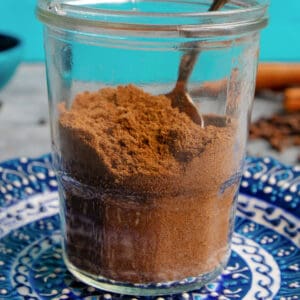 How To Make Seven Spice Blend