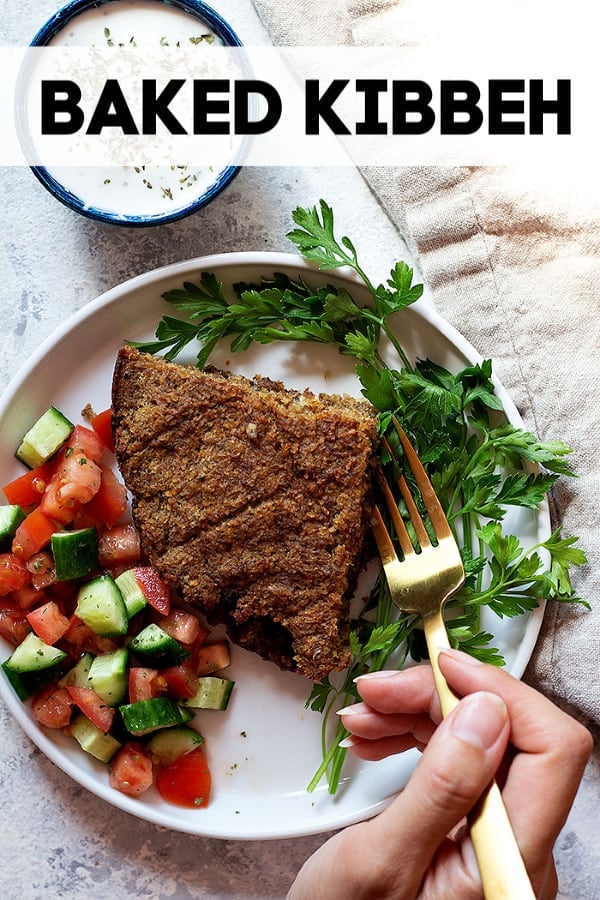 Kibbeh is a Middle Eastern meatball made with bulgur, ground beef and warm spices such as cinnamon. A great kibbeh is characterized by a tender shell stuffed with delicious spiced beef filling. Learn how to perfect this classic of Middle Eastern cuisine with our step-by-step tutorial and video.

I love Middle Eastern food, not only for the memories of my childhood in Iran that it carries but also because of its incredible flavors. From falafel and kofta kebab to mujadara, toum and shish kabob and everything in between, Middle Eastern cuisine is truly delicious! Today we are working with a classic dish called kibbeh, a Middle Eastern delicacy made with ground beef or lamb, fine bulgur, onion, and a combination of Middle Eastern spices.

Kibbeh, also known as kubbeh, kibie, quibe or kubba is a classic Levantine dish made primarily with bulgur, ground meat (lamb or beef), and Middle Eastern spices such as allspice and cinnamon. The word itself roughly means "the shape of a ball" in Arabic.

Here is what you need to make the shell:

And to make the filling, you need:

To make sure you're following the steps correctly, please make sure to watch the video and step-by-step tutorial. I have included the instructions for both the fried and baked versions.

Place the bulgur in a large bowl and pour warm water over it. Wash the bulgur and discard the water. Just leave a little water in the bowl for the bulgur to absorb. Let it sit for 10 minutes.

Add the spices, grated onion and the ground beef to the bulgur. Mix and knead well until all the ingredients are well combined. You can do this step using a food processor. Cover the bowl and refrigerate for at least one hour.

Meanwhile, heat olive oil in a pan and sauté onion until golden. Add in the ground beef and the spices. Brown the beef until it's fully cooked, breaking it into small chunks as it's cooking. Stir in the pine nuts and cook for a minute. Turn the heat off and set the filling aside.

To make fried kibbeh, divide the dough into balls as big as eggs. With wet hands, shape each ball. Using you index finger, press into the ball to poke a hole on one end. Rotate the ball until it forms into a cylinder. Fill the shell with the filling. Seal the edges using wet hands to form a football. Repeat this step until you run out of dough.

Place all the balls on a baking sheet lined with parchment paper. Place the baking sheet in the freezer for about 30 minutes. Meanwhile, start heating some oil in a sauce pan over medium heat. There should be enough oil to cover the kibbeh balls when you fry them.

Once the oil is hot and you can see small bubbles, start deep frying the beef croquettes in batches. Make sure not to overcrowd the saucepan otherwise they won't fry properly. Fry the balls for about 5 minutes until they're golden brown on all sides and completely cooked.

To bake, preheat the oven to 400ºF and divide the dough into two parts. Coat a 9x13 baking dish or a round baking pan with non stick oil spray and spread half of the dough at the bottom of the baking dish. It's easier to spread the dough with wet hands.

Top the dough with the filling and spread it evenly. With wet hands, spread the other half of the dough on the filling, patching every part that might tear.

Using a knife, cut the top part into diamonds (as shown in the video). Bake in the oven for 20 to 25 minutes. Let your baked kibbeh cool for a few minutes before slicing it. To serve this dish, open it up and spread some yogurt sauce on it. Put the top on and serve.

According to Wikipedia, there are different variations of this recipe in different regions and countries. One of the most popular types of kibbeh is called kibbeh nayeh also known as raw kibbeh which is made with bulgur, very finely minced raw meat (lamb or beef), mint and spices and it's similar to steak tartar.

A type of Iraqi kibbeh called kubba halab is made with rice instead of bulgur. This type kibie is also common in Iran - though we like to add in barberries. Other variations include kibbeh aras (disk kibeh), sumac and yogurt variation also known as kibbeh labanieh. The city of Aleppo in Syria is famous for offering more than 17 types of kibbehs, how amazing is that?

Kibbeh is often served with a side salad such as Mediterranean salad or fattoush. Here we made a simple yogurt garlic sauce to dip that you can make with homemade yogurt.

What to do with the leftovers?

Store the leftover kibbeh in an airtight container and refrigerate for up to 4 days. If you have leftover filling, you can serve it with some plain white rice, rice pilaf with orzo, or even some Lebanese rice with vermicelli.

Yes. You can make the mixture for the shell and the filling up to a day in advance and make the dish a day later.

Can I freeze this?

Can I use any other meat beside lamb and beef?

Classic Kibbeh is made with either lamb, beef or a combination of both. Using any other meat won't work for this recipe.

Can I leave out the bulgur?

The bulgur brings the shell together and makes it workable so leaving it out won't be possible. 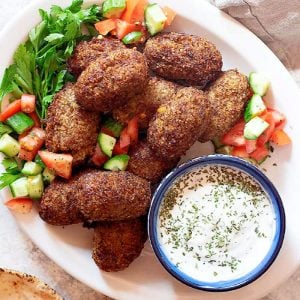