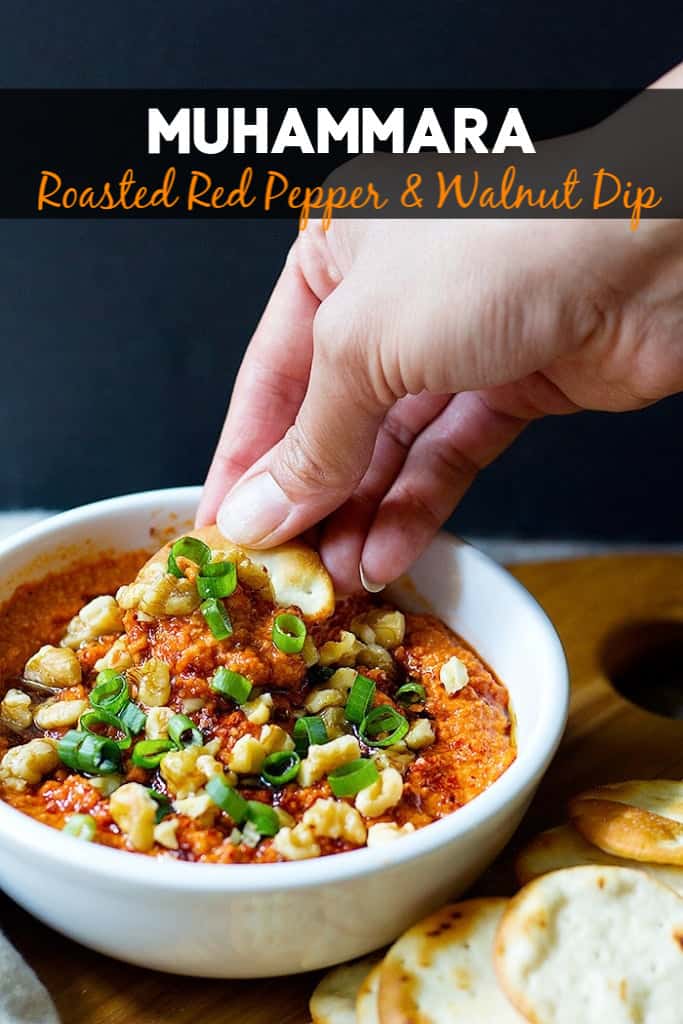 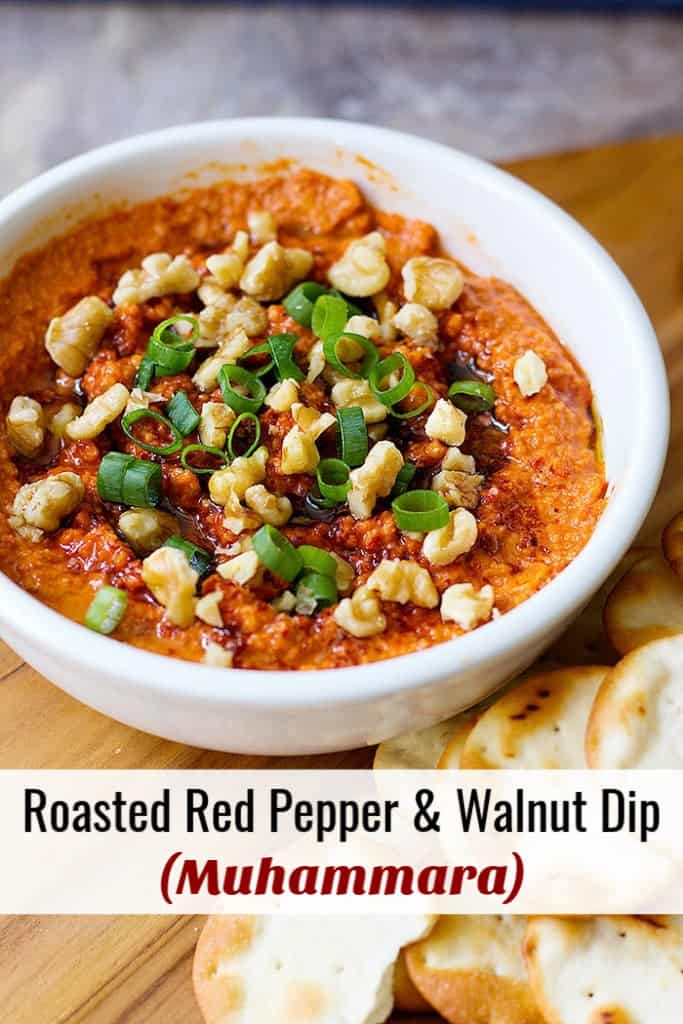 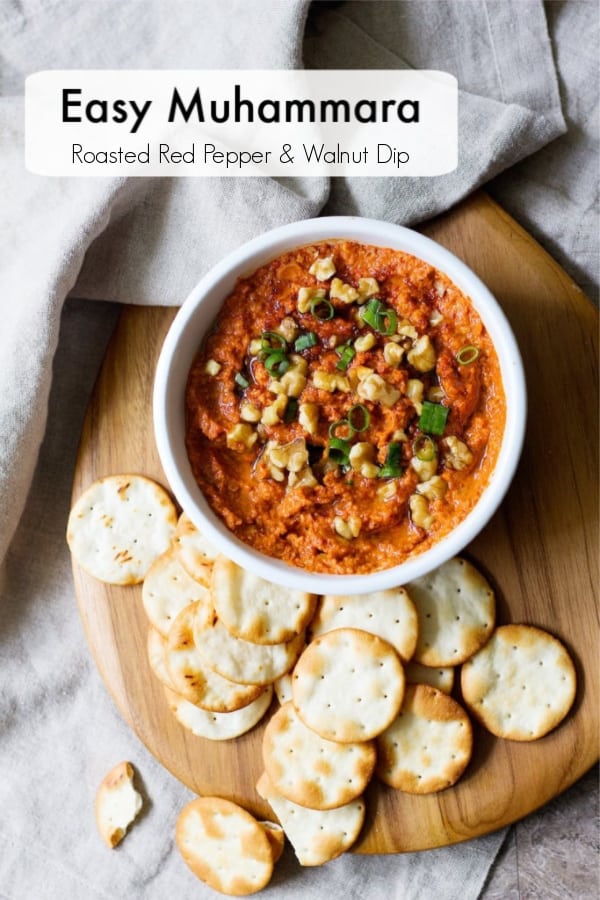 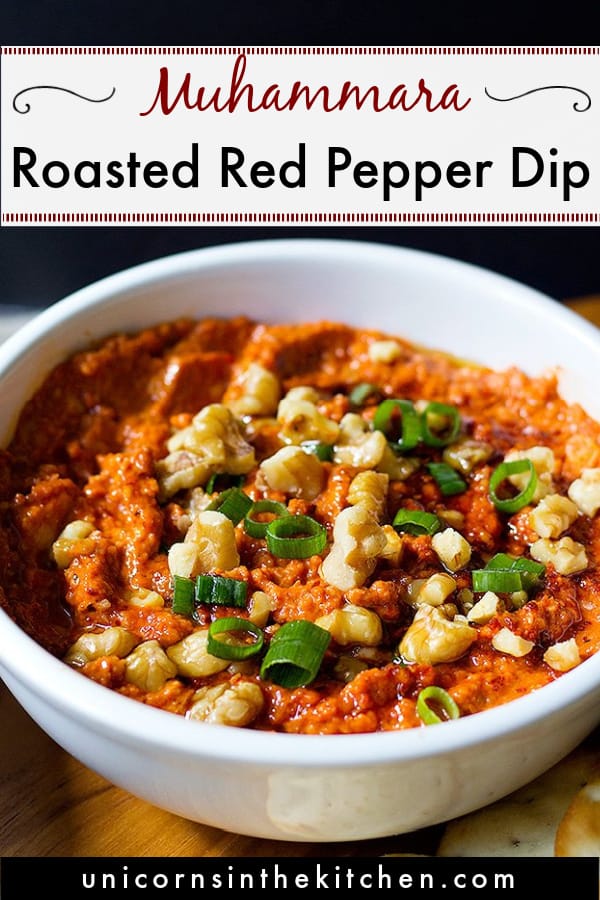 Muhammara is a tasty Middle Eastern roasted red pepper dip. This classic recipe is made with roasted red peppers, walnuts and olive oil. You can make this vegetarian dip rather quickly using only a few ingredients. It has a unique flavor thanks to pomegranate molasses and walnuts.

Dips and spreads are a big part of Middle Eastern and Mediterranean cuisines and are usually served on a mezze platter as an appetizer. Some popular dips are hummus, baba ganoush and of course, tzatziki. Today we're talking about Muhammara, a classic dip that's packed with amazing flavors of roasted red peppers and pomegranate molasses.

As for the taste, muhammara has a mild flavor thanks to roasted red peppers and walnuts and is balanced with the pomegranate molasses.

Even though this spread was born in Aleppo, Syria, it's now a common vegetarian appetizer in Levantine and Turkish cuisine and there are different variations of it. This dip is similar to Ajvar, a red pepper dip from the Balkans, specifically Serbia.

There are so many variation of muhammara but the most common ones include roasted red peppers, walnuts, olive oil, Aleppo pepper and bread crumbs. It's common to add some pomegranate molasses to the dip to balance the flavors and add some subtle tanginess to balance the sweetness from the roasted peppers.

To make this Mediterranean roasted red pepper dip, you need the following ingredients:

How to roast red bell peppers

I used store bought roasted red bell peppers for this recipe, however, here is a small tutorial on how to roast them at home:

How to make muhammara

We just love making this delicious appetizer for our parties and gatherings since it's also a good addition to a mezze platter with hummus and other Mediterranean appetizers.

This roasted red pepper dip is quite versatile; you can use it in so many different ways such as:

It's amazing how a healthy vegetarian appetizer can be so delicious! A simple vegetarian dip like muhammara is something that no one can resist!

What to do with the leftovers

If you have leftovers, which I really doubt, you can put it in an airtight container and refrigerate it for 2-3 days. I won't refrigerate it for any longer since the ingredients would start losing their flavors and textures. Also, do not freeze this dip as it will lose all its texture and becomes all mushy and watery. it is best to serve this spread the same day you make it.

What can I use instead of walnuts?

The main flavor of this roasted red pepper dip comes from walnuts and using other nuts instead of walnuts might alter the flavor and texture. However, if you would like to use an alternative, pine nuts or cashews could work for this recipe.

Yes. You can make muhammara a day or two before serving. It'll keep the flavor and texture very well.

What can I use instead of Aleppo pepper?

Aleppo pepper has a specific taste. It's not hot, but has a kick. If it's not available, you can use chili flakes.

Can I make this recipe gluten-free?

To make gluten-free muhammara, use gluten free bread crumbs which you can find in many supermarkets or online. 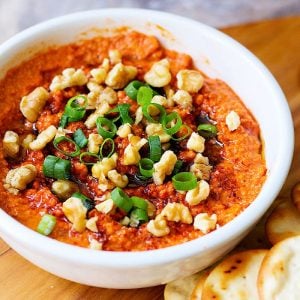