This Pumpkin Bread Pudding is perfect for both dessert and breakfast. Learn how to make homemade bread pudding with a few ingredients. This bread pudding is served with a coconut maple cream and is jam-packed with fall flavors!

This one is my favorite pumpkin desserts/breakfasts. It's an easy recipe for pumpkin bread pudding that is so soft and gooey, especially when it's warm. It's so difficult to have only a bite! 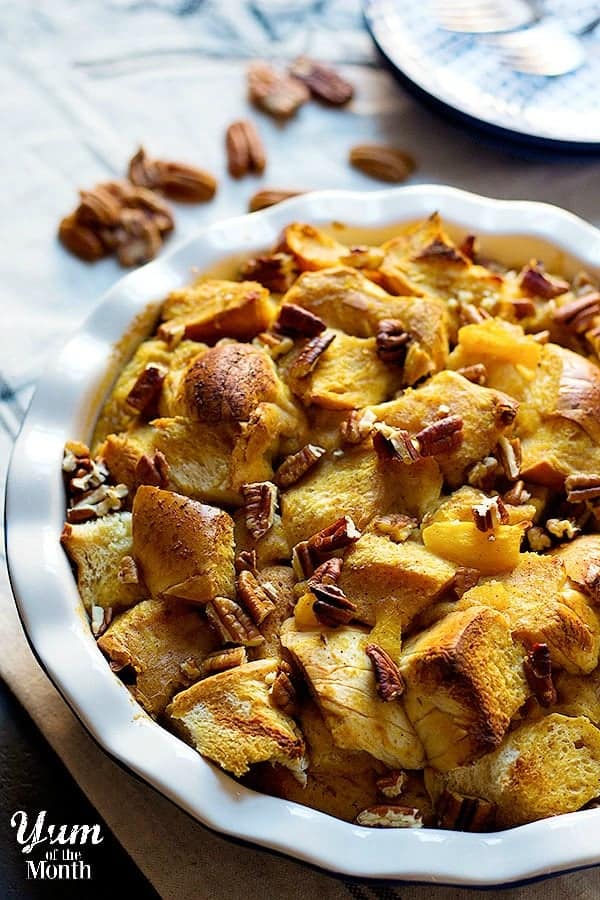 This year I'm somehow obsessed with fall recipes and pumpkins, I'm posting two pumpkin recipes back to back and, guess what,  we are not even halfway through pumpkin season! I can say that one reason for obsession is having the most delicious homemade pumpkin puree that I made from scratch.

The day I made my homemade pumpkin puree, I knew I wanted to make something with pumpkin flavor as soon as possible because the smell and color of the puree was calling my name and capturing my heart. And I was already in the kitchen, trying to divide the homemade pumpkin puree between freezer bags to store them.

Looking around, I saw a brioche bread I had gotten a couple of days ago and I knew neither Kyle nor I was about to eat that. And that's how this easy pumpkin bread pudding came to life.

What kind of bread is used to make bread pudding

You can use almost any kind of bread to make homemade bread pudding. Brioche has a nice buttery texture that makes the this pumpkin bread pudding pretty tasty. You can also use French bread, Italian bread, challah or baguette. Make sure the bread you're using is not fresh. Stale bread always works better as it doesn't get soggy. 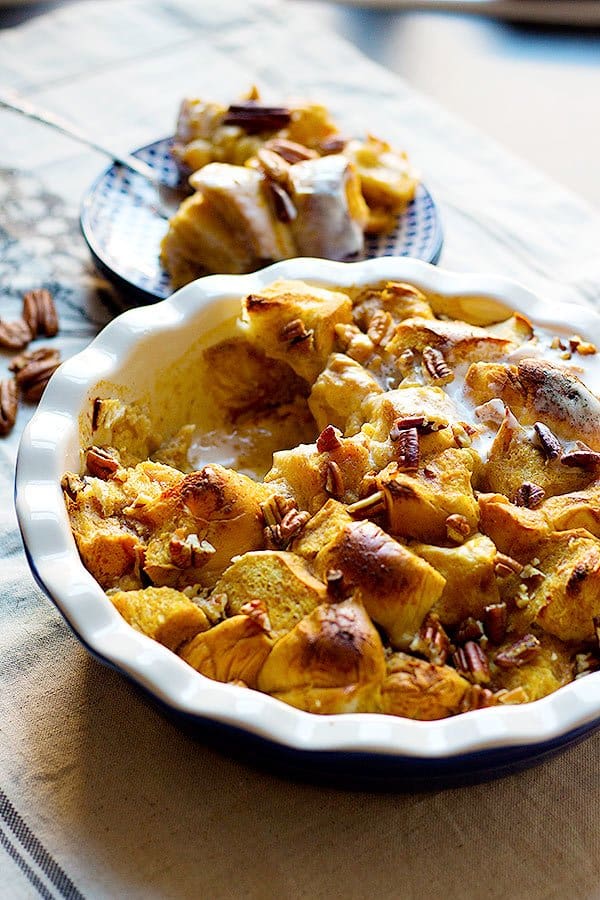 I cut the brioche into one-inch pieces and placed them in an oven safe dish. Then I mixed my homemade pumpkin puree, eggs, milk, condensed milk (I love condensed milk, so much) and pumpkin pie spice and then poured it over the brioche pieces. Now here is the best part: I let that deliciousness cool in the fridge for 2-3 hours while I finished up some more recipes and cleaned the kitchen.

Then I baked it and this homemade brioche pumpkin bread pudding with condensed milk tasted phenomenal. It was so good, that I just needed to share it with my neighbor otherwise I would have eaten it all myself, no shame. 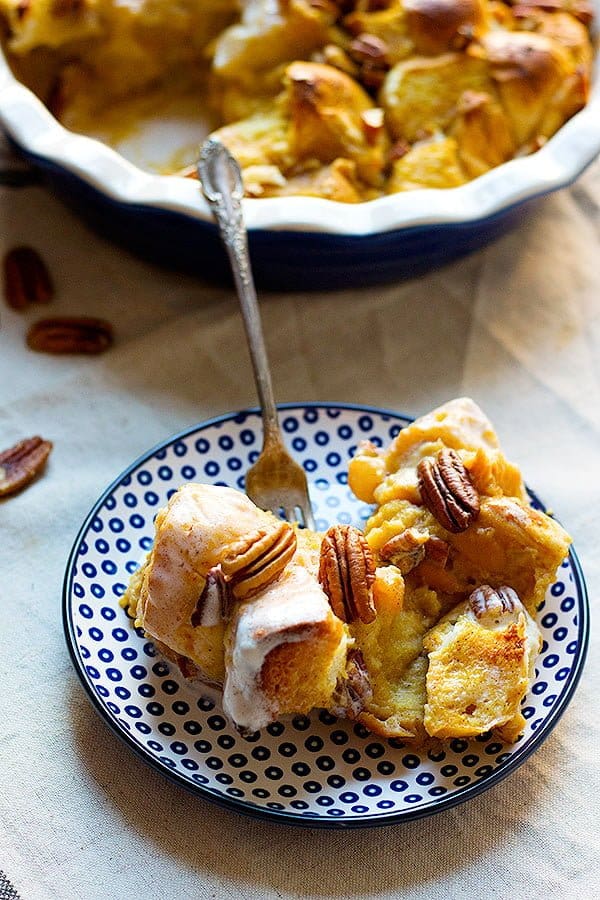 What to serve pumpkin bread pudding with

This homemade bread pudding recipe comes with a bonus recipe for coconut maple cream. I chilled some coconut cream and mixed it with maple syrup. That gave the bread pudding some extra flavor that you won't be able to say no to.  You can also serve this pumpkin bread pudding with caramel sauce. Learn how to make an easy caramel sauce recipe on Serious Eats.

One more thing about this absolutely marvelous pumpkin pecan bread pudding: The leftovers are the best!!! 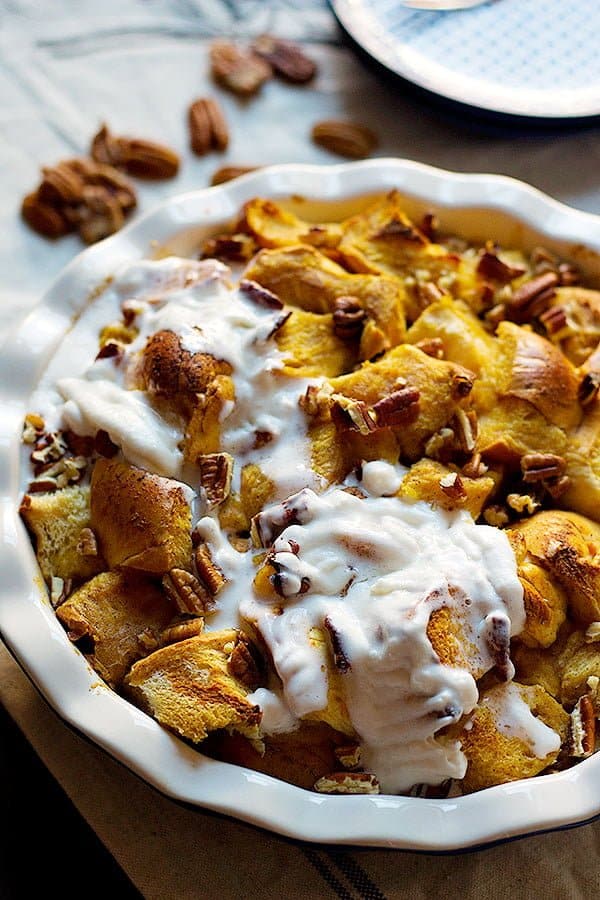 Notes and tips for this pumpkin bread pudding recipe: 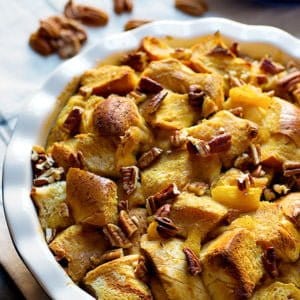 Calories: 300kcal
Did you make this recipe? Let us know how it was by leaving a comment and a 5-star review!
« The Best Ever Banana Milkshake
Banana Bread Muffins with Walnuts »
866 shares